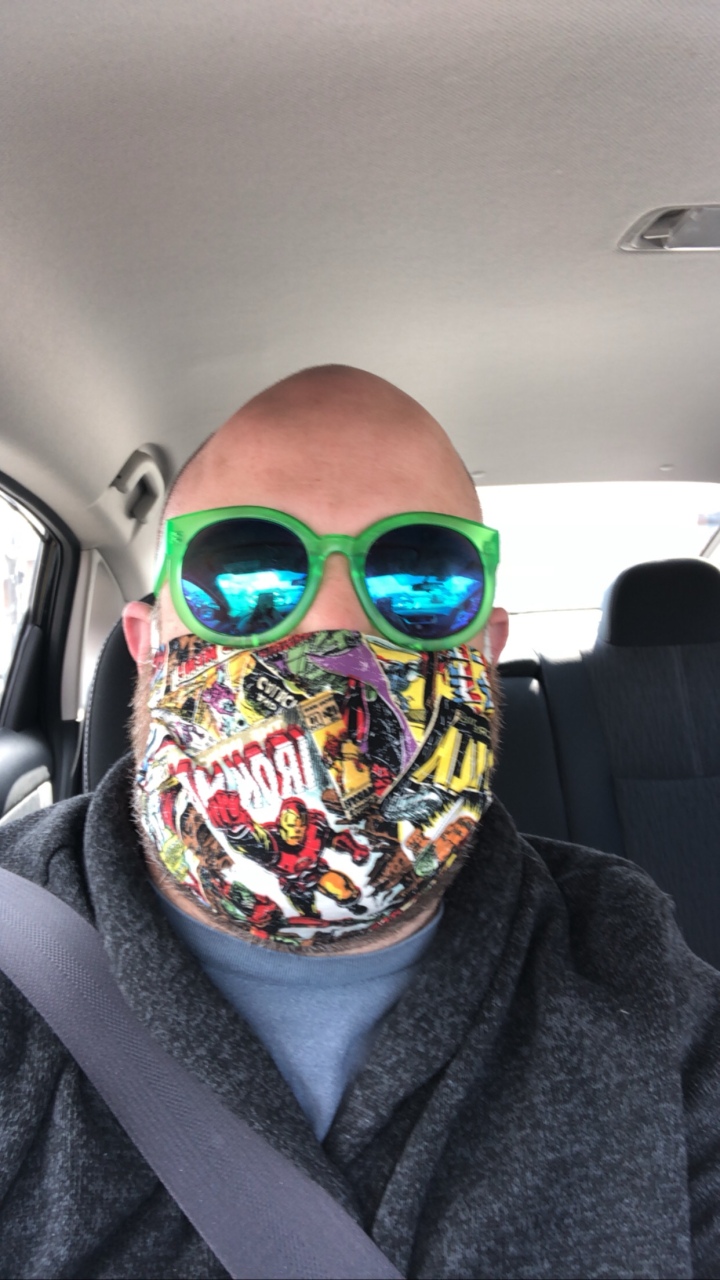 You guys, I swear… I was trying to be nice.

I went into this weekend with a heart full of love and acceptance and a mind prepared to discuss differing opinions and determined to see the other side of the situation. I was going to be a different person; a unifier, a leader in difficult times.

That lasted most of a morning.

I did get to learn a little bit about the kind of people who are in groups like this and how they think and have conversations with people who disagree with them. I refuse to generalize and say that everyone against the stay-at-home orders (in Illinois, Governor J.B. Pritzker extended the order until the end of May) thinks this way or acts this way. I don’t believe that.

But I also dealt with a couple of silly-billies yesterday, and I want to talk about it.

On Thursday, I posted a story about being booted from the Facebook group Michiganders Against Excessive Quarantine. You should check it out if you haven’t. To help promote the story, I decided I would join two different kinds of groups and post a link: people who were for the stay-at-home restrictions, and people who felt like it was an “excessive quarantine”. These seemed to be my target demographics, and I was determined to hit them hard.

What was really nice was the amount of positive feedback I got. What was surprising was that I was also getting positive feedback from the groups wanting to lift the restrictions. Sure, they disagreed with me, but a lot of people felt like my article was all in good fun and there’s nothing wrong with making fun of stupid dill-holes, who we can admit are in every group, in some form.

One of the groups I joined was Illinoisans Against Excessive Quarantine, which is where our story takes place. I got accepted into the group and posted my article and kept going about my day. What I should have done was mute all messages from these groups so they didn’t show up in my feed. I definitely should have done that.

Before I get into my story, I want to talk a little bit about Trapt, because they are an absolute group of tool bags and ding-dongs.

If you don’t remember them, Trapt is a band who had a major hit on alternative radio in 2002 called “Headstrong”. I guess you could call their music “hard rock” or “nu-metal”, but I have my own distinction for music like this: butt rock. That, for me, is the easiest way to describe bands like Trapt and their ilk: it’s rock. That sounds like butt.

Anywho, Trapt is still moseying along as a band despite not having another radio hit in two decades. But, I kind dig that about them. They’re a band. It’s their job. In 2008, I got to do stand-up comedy while opening for Powerman 5000. And while it was awesome for me, I spent most of the night feeling bad for them. Here was a band who had a gold fucking record, and they’re spending the night in a bar that won’t even turn off the basketball game off the television when they’re onstage. However, what brought me comfort when I was talking to them after the show was this fact: being a band is their job. Some of us hate our jobs, but their job is to travel the country and perform in front of people who want to be reminded of what it’s like when worlds collide, goddammit.

But, back to Trapt, who are now a bunch of MAGA dipshits.

I don’t know if it’s all the band or just whatever member runs their social media, but most posts are filled with the pro-Trump rhetoric which makes me roll my eyes. And, boy howdy, do they love when people attack them on Twitter and they get to cuck out the libs… or whatever.

Recently, they got into a squabble with Ice T and it had to do with something about them saying they were more popular than Body Count… or whatever, who cares? Why it was funny is because Ice T just kept chiming in basically asking, “Who are you guys?”

I tried to troll them by continually referring to them as Trapped, but got nowhere. But who got somewhere was rapper Talib Kweli, who Trapt also decided to go after. Kweli found these two tweets and posted them. It’s amazing trolling.

What makes this exceptionally epic is the extent of who saw this. Trapt has a following on Twitter of a little over 25,000 followers, which is impressive. In comparison, I have a hair under two thousand, though I also never made a song which was number one on alternative radio (that being said, follow me on twitter).

Talib Kweli has over a million followers. And they all saw this.

Trapt must not enjoy that fact, because when I posted the exact same tweets, I was blocked from their Twitter and could no longer post on their Facebook page.

Anyways, my point is fuck Trapped.

Back to my story.

I woke up in the morning to see a post in my Facebook feed from one of the members of Illinoisans Against Excessive Quarantine. He was defending a little bit of a gaffe made by President Trump earlier in the week in which he asked a question to doctors which wasn’t worded perfectly and led some to believe that the leader of the free world was asking if it was, medically, okay to inject yourself with disinfectants. This poster was not having it, and went on for a few paragraphs saying how the media twisted his words and what President Trump MEANT was this thing about these tests and UV light and blah blah blah.

This struck me as odd, because the next day, President Trump went ahead and said the he was being sarcastic when he asked his question because he wanted to see how the press would react. It was very clear what he was saying: Trump was asking a stupid question, on purpose, during a press conference about a national health crisis to… own the libs, I guess. However, it posed an interesting query: if Trump was, indeed, being sarcastic, then there shouldn’t have been any need for anyone to explain what he was saying. In fact, if the President was telling the truth about his sarcasm, then the media was reporting the story (minus alleged tone) 100% correctly. So, I replied to this guy’s comment with the simple question: “If what you say was true, why did the President say he was being sarcastic the very next day?”

That did not go well.

(AUTHOR’S NOTE: I had debated posting the screenshots of this exchange, but out of respect of the privacy of one weirdo in a Facebook group, I chose not to.)

His immediate reply was pointing out that the frame to my Facebook profile picture is, as I mentioned in the last post, a message for people to stay home and save lives. He then accused me of being a troll, and then asked me to verify where the President said he was being sarcastic, saying he could not find any record of it. This seemed suspect to me, because a google search of, “Trump sarcastic” pretty much brings up every news source in the damn world. But, I posted an article from The Hill, as well as ones from Fox News and Breitbart so I wouldn’t be accused of liberal media bias.

The exchange went on with him refusing to answer the question, instead posting just various things from my personal page, as if to imply that because we have differing opinions on whether the stay at home order is an “excessive quarantine” then he can’t believe anything I say about anything. To be fair to this yokel, he wasn’t just implying it. He was directly saying it. In my favorite part of our exchange, he wrote, “You’re either for us or against us, comedian Matt Drufke.”

This went round and round a few more posts, and eventually he just stopped responding to my questions. But, it’s easy to see what this guy’s strategy was: if someone disagrees with you on an issue, attack them personally as a way to invalidate their point. It’s terrifyingly effective.

But that’s not what got me booted.

Before I continue, I want to get to one last side-point, and this is an important one: read the fucking articles you post.

In the aftermath of the President’s comments about what should or shouldn’t be ingested to fight coronavirus, I saw a bunch of liberal ding-dong friends of mine post an article saying that there was a mass increase of calls because people were consuming cleaners. On the whole, this statement is true. However, it had nothing to do with what the President said this week, and people were attempting to imply directly that.

A quick read of the article, like the first fucking paragraph, explained that in the past six weeks, there have definitely been an uptick in calls to poison control. But, the article also gave the reasoning: most of these calls were because children were getting their hands on these cleaners because parents were cleaning their houses more. It’s a case of a bad side effect from a positive actions, but it was being used by people who were trying to tie this to Trump. If they hadn’t read the article they posted, they were being willfully ignorant. If they had read it and still posted it, they were being deliberately misleading. Neither of these is a good thing.

So, read the damn articles.

(That being said, while doing some last minute research, there are a new batch of articles which seem to be able to make direct links between the President’s comments and an increase in the ingestion or cleaning products. So, what do I know?)

So, what was the last straw that got me booted from Illinoisans Against Excessive Quarantine? How great would it be if it were just some misunderstanding and not me coming forward because the page administrator posted something kinda bigoted? Wouldn’t it be amazing if that wasn’t the case and didn’t involve any Islamophobia?

I think you know where this is going.

Ok, that last one she didn’t say, but you get the point.

Now, let’s ignore for a moment the fact that there is no specific “Easter meal”. For some, it involves ham. For others, turkey. My Easter dinner this year was a bowl of Cinnamon Toast Crunch. I do agree with the poster’s implication that it would be troubling if New York City was only serving Halal meals and no other food to any other people. But, I think we both know that isn’t the case.

Was the admin here being misleading? Absolutely. Was she being Islamophobic? Yeah, a bit. I didn’t bring up the whole bigotry stuff, but did post an article explaining ALL the meals NYC was giving out.

I want to point out again that my plan was not to have this be a continuing series.

I obviously disagree with most of what these people are saying, but I’m not waking up wondering which group will bop me out next. I, genuinely, have more important things to worry about. I’ve since muted all of the other groups where I promoted the last article and won’t go back. That is, until I start promoting this one.

I didn’t think I would be asked to take some blood oath or pledge. But, as I was told, I am comedian Matt Drufke. And I’m either with you or against you.