Did the album need to be religious? No, but don’t piss in my ears and tell me it’s holy water.

After a year of missed release dates, speaking out against premarital sex, and Stanning for Trump, Kanye has finally released…whatever the fuck this is.

Being billed as a gospel album, Jesus Is King clocks in at just over twenty-five minutes, which is also how long I assume Mr. West spent penning the lyrics for these tracks, the highlights of which are prose such as “You closed on Sunday. You my Chic-fil-A/You’re my number one, with a lemonade.” and “What if Eve made apple juice/ You gone do what Adam do?” 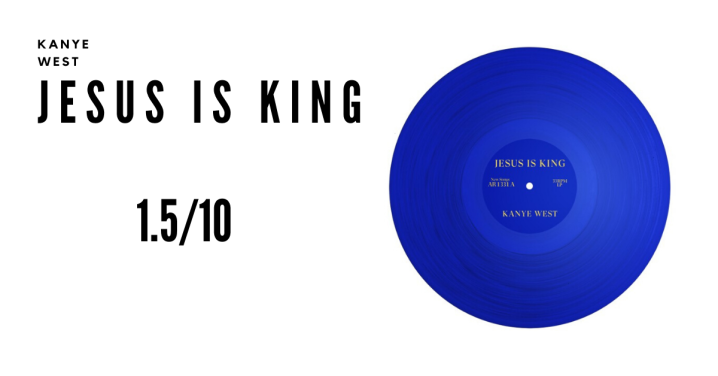 Concededly, it is usually not fair to take lyrics out of context and use them as a critique of an album. Imagine if we judged Queen by “I want to ride my bicycle, bicycle, bicycle.” Also admittedly, people who latch on to the argument for lyrical superiority in rap, tend to be suburban kids who only listen to Eminem and Logic. That being said, not only do Kanye’s bars in JIK have the lyrical prowess of a Wal-Mart bin Christian album, he appears to not even know what a gospel album actually is.

At the risk of pigeon holing an entire genre, the primary motif of gospel tends to be stories of trials and redemption, often placing characters at their lowest point, from which they are only able to pull themselves out of through the help of God. They are heroes’ journeys in the purest form.

Throughout the album, Kanye’s main throughline is him praising himself for praising God, a being or entity that is abundantly clear he is only familiar with on an extremely vapid and superficial level. If this collection of songs is to be considered a gospel album, then Kim’s sex tape should be considered a sermon since she moans “Oh my God” in it.

It is nearly half an hour of Kanye jerking himself off for being re-baptized, in the same way he is done in songs past, but about fame, money, or success. Because, to Kanye, that is what religion is: another commodity to be hoarded. A tangible item whose primary value is license to look down on those who don’t have it.

None of this is to even mention the sound quality of Jesus Is King. Kanye has squeezed out some lyrical turds in the past, but the vast majority have at least been well produced (see: Famous). His production has always surpassed his rapping ability, which has made missteps in previous bars at least tolerable. That is far from the case here. Some songs on the album, such as Follow God, are mixed so poorly that I thought I had broken my headphones, or there was a bandwidth issue with the stream.

In fact, I’d go so far as to say that the sonically best moment in the album comes at the final full-length track, Use This Gospel, in the form of a forty-five second saxophone solo by Kenny G, a musician who’s entire sound can be summarized as “two elevators fucking.”

While this album has failed on pretty much every level, it’s worth noting the one aspect that hasn’t failed: Kanye’s Spaceballs-esk merchandising. The album had been delayed more times than I remember, but its online store has been up and running without a hitch, sucking money from Kanye’s fanboys like the bankers Jesus ran out of the temple with a whip. That’s because this album, and the God it claims to praise, are an afterthought to the boatloads of money it will make the West family.

The final rollout of Jesus Is King has featured interviews with Kanye, where he speaks out against premarital sex, and promised to go back and rerecord his previous albums without swearing. Imagine reading the Bible, and those being your only takeaways. Those two anecdotes alone, tell you all you need to know about how tediously hollow this album is.