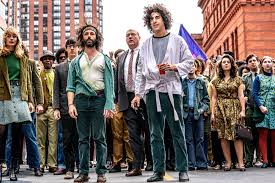 Even with theaters re-opening, there are still many options on where to stream movies at home. I caught up with the new works from Aaron Sorkin.

For a dude with an Oscar, a couple of Golden Globes, a pair of WGA awards, and five Emmys to his name, Aaron Sorkin is a polarizing figure. For those who enjoy his work (like myself), he’s one of the more interesting writers working today, excelling at snappy dialogue and the ability to wrap scenes together seemlessly. For those who do not enjoy his work (like FBC co-producer Jack Baker), his works are pretentious slogs and have done more to damage American government that McCarthyism and lobbyists combined.

Last week was a banner week for Sorkin fans (I assume Jack just wept in a corner) as he released The Trial Of The Chicago Seven, his sophomore directorial effort, and A West Wing Special to Benefit When We All Vote, which brought back the cast of his most popular (and revered) work to recreate an episode onstage. Sorkin clearly feels that he has a lot to say and that, with the 2020 election looming, his voice is just as relevant and needed as it’s ever been.

The Trial Of The Chicago Seven is Aaron Sorkin’s least Aaron Sorkin-y screenplay, and while that might bother his most die-hard sycophants, I’m also not so sure that’s a bad thing.

Re-telling the story of the U.S. government’s trial against eight radical leaders who came to protest the Vietnam War at the 1968 Democratic National Convention, the film brings together an unlikely group of activists all brought together under the government’s conspiracy charge: Students for a Democratic Society leaders Tom Hayden (Eddie Redmayne) & Rennie Davis (Alex Sharp), Youth International Party (or the Yippies) founders Abbie Hoffman (Sasha Baron Cohen) and Jerry Rubin (Jeremy Strong), National Mobilization Committee chair David Dellinger (John Carroll Lynch), academics Lee Weiner (Noah Robbins) and John Froines (Danny Flaherty), and Black Panthers founder Bobby Seale (Yahya Abdul-Mateen II). Put on trial by prosecutors (Joseph Gordon-Levitt & J.C. McKenzie), everything is against the eight due to a partially-inept and wholly-biased judge (Frank Langella as Julius Hoffman), the defendants are found struggling for their freedom while on a mission to show the nation that the trial is more about the Nixon administration trying to punish it’s enemies rather than dispense justice. However, besides battling the system, they’re also battling each other: Hoffman & Rubin are hellbent on trying to show the world what a farce this trial truly is, Hayden is a man trying to create change through respect and reverence of the system, and Seale is not even allowed the right to defend himself (his attorney was in California recovering from surgery). Trying to keep all the plates spinning is the lawyer for all the defendants, except for Seale, William Kunstler (Mark Rylance).

Sorkin’s script is tight and effective. It’s clear that he loves courtroom intrigue as the best parts from his best scripts take place during hearings or depositions (A Few Good Men, The Social Network, Molly’s Game, the final two seasons of The Newsroom just to name a few). Maybe it is due to his reverence of the events, but a lot of the snappy banter we expect from him gets pushed to the sideline in exchange for terse, heated discussions. Usually, Sorkin’s screenplay is always considered the star of the film, but he has enough star power here, so there’s no need to show that he’s the smartest guy in the room, as he clearly has enjoyed doing in his previous works.

In fact, this film showcases his directorial style more than his writing. As witnesses give their testimony in court, Sorkin cleverly intertwines the words of the witnesses, the events as they actually happened, as well as footage from live Abbie Hoffman performances (which has the feel of a stand-up comedy set). All of this makes for a creative and entertaining way to effectively show what’s happening, and that provides a strong emotional impact. This is only his second film as a director, but Sorkin has grown as a visual storyteller by leaps and bounds since Molly’s Game, and he’s happy to put that on display.

As I mentioned before, it helps when you have a cast this good. Baron Cohen gets perhaps the easiest (well, showiest) role as Hoffman, and he bites into it with full gusto, making sure that he’s the focal point of every setting he’s in. Eddie Redmayne does a good job bringing weight and heft to his character, and Jeremy Strong does a fantastic job of making his character seem idealistic and naive, when he could have easily been played as one of the stupidest men alive. Only Langella has some tonal issues here, but he’s not entirely to blame; the script basically portrays him as an inept old codger, so there’s not a lot of places for him to go as an actor.

The movie’s centerpiece involves the mistreatment of Seale during the trial (at one point, he is shackled and gagged), and it’s a good metaphor for what the film is trying to accomplish. You cannot watch that scene (heartbreakingly acted by Mateen) and not have all the emotions swirl inside you: sadness, rage, desperation. When The Trial Of The Chicago Seven is at it’s best, it brings all of these feelings to the surface. Aaron Sorkin may not have delivered a screenplay full of his usual tricks and tics, but he’ll just have to settle for having one of the most impressive directorial efforts of the year.

When talking about A West Wing Special to Benefit When We All Vote, we need to ask ourselves two questions: What is the special trying to do? And how successful is it in doing it?

First, let’s discuss what it is.

The special is a stage re-enactment of The West Wing episode “Hartfield’s Landing” from the show’s third season. All of the original cast is back with Sterling K. Brown playing the role of Leo McGarry (replacing the late John Spencer, who passed during the filming of the show’s last season). In-between the acts (where the commercial breaks would have been), various celebrities such as Lin-Manuel Miranda, Elisabeth Moss, and Samuel L. Jackson explain the importance of voting, especially in this election.

If we are to believe the title of the the show, this episode is to help When We All Vote, a non-partisan organization attempting to increase participation in every election. Bradley Whitford, who plays Josh Lyman, opens the show by saying, “We understand that some people don’t appreciate the benefit of unsolicited advice from actors — we do know that. We feel, at a time like this, that the risk of appearing obnoxious is too small a reason to stay quiet if we can get even one new voter to vote.” Fair enough, Mr. Whitford.

I commend any group or event trying to raise voter turnout. I would love elections that featured a 75-80% turnout of eligible voters. But this show is not the way to do it for so many reasons. First of all, as my wife so brilliantly pointed out last night, what person interested in a recreation of an almost 20-year old episode of The West Wing doesn’t plan on voting? This is not the type of event to reach the crowd When We All Vote is trying to reach. The show even admits as much, by having Elisabeth Moss and Dulé Hill tell us about how young people don’t vote. Moss is 38 and Hill is 45. Also, the show brings out pleas to vote from Michelle Obama and Bill Clinton without any sort of conservative representation. For a show trying to help a bipartisan organization, it felt pretty damn partisan to me.

If the intent is truly trying to raise turnout, this is, 100%, the wrong format to do it. Because of this, the special feels wildly masturbatory and excessively self-aggrandizing.

But that doesn’t mean it’s bad.

If we ignore the show’s intended purpose and just take what we’re given, then there’s something very folksy and charming to what we’re seeing. Director Thomas Schlamme (who also directed the original episode when it broadcast in 2001) makes this performance feel like a play rehearsal that we’re sneaking a peek at, and there’s something very home-y and quaint about that. And, much like The Trial Of The Chicago 7, this is a cast who knows how to act. Martin Sheen. Whitford. Allison Janney. Rob Lowe. Hell, I think Richard Schiff gives a better performance in this retelling than he does in the original episode.

Furthermore, this script is pure Sorkin, filled with his trademark wit and smarts and charm, and it’s fun to go back to that. I rewatch The West Wing every other year (or so) and there was something really fascinating about watching these actors go back nearly two decades and try and dance the Sorkin dance all over again.

Maybe this special failed in it’s goal. If so, then I would liken in to hot chocolate: empty of any nutrition, but smooth and sweet and just what you need for a cold day sitting on the couch.