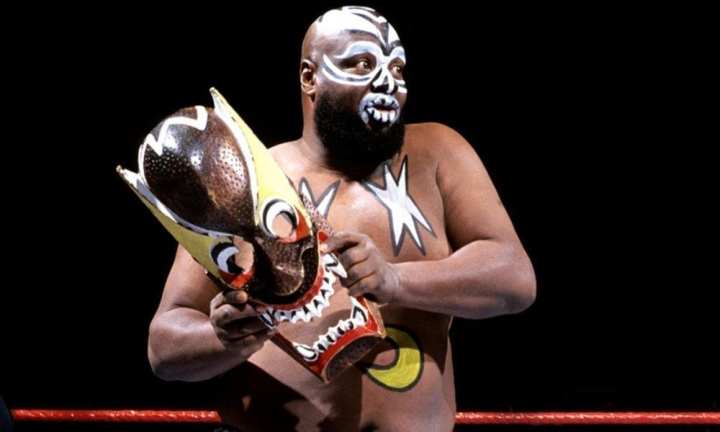 Wrestling has always been built on stereotypes. Anyone that looks vaguely eastern European could be booked as a menacing Russian. Asian wrestlers were often booked as karate stars or dressed like ninjas. Black wrestlers would run the gambit of stereotypes over the years, whether it be Bobo Brazil and Junkyard Dogs would play benign good guys, who had to play up their friendliness to get largely white crowds to let their guard down. Koko B Ware wore loud, colorful clothing to represent what Vince McMahon believed to be black MTV culture. On the other side of this was James Harris, who would fleeting and middling success following the good guy route, but would reach national fame playing an African savage to oppose some of the biggest stars of WWF’s golden era.

James Harris was born and raised in Mississippi. After his father was murdered, he fell into a life of crime before leaving town and ending up crossing paths with the aforementioned Brazil. Harris had ideal size at the time for a wrestler, being billed at 6’7 inches (though this was often and almost exclusively embellished during the era) and over 300 pounds. After some training, he went south and would become a popular wrestler during the slowly dying days of the territory era. Before the WWF, now WWE, there were many wrestling promotions spread throughout the country, with over 40 different National Wrestling Alliance recognized promotions across the United States, Canada, and even Australia. As WWF start consolidating power in the early 80’s, many promotions died out. In the south, though, territories continued to hold strong throughout the eastern seaboard and down into Texas.

Harris first came to fame as Ugly Bear Harris, who was managed by Percy Pringle, who would go on to greater fame as Paul Bearer, the ashen manager of The Undertaker. He would win smaller titles throughout the south in the late 70’s and early 80’s. His big break though would come while he was sidelined with an injury.

While meeting some friends in Memphis, he met Jerry Lawler. Lawler is best known as the perpetually horny WWE announcer, but back then was considered one of the biggest wrestlers in the country, on the level of Ric Flair during that time. Lawler ran Continental Wrestling Alliance out of Memphis. CWA and Memphis were considered to be the last great holdouts of Vince McMahon’s takeover of the wrestling world. Run by Lawler and Jerry Jarrett, one of the most influential bookers and company owners in the history of wrestling, they were able to cultivate massive stars who would inevitably move on to become WWF superstars. It was the final territory promotion that Randy Savage wrestled for before going to the WWF. Paul Heyman got early breaks as a manager there. Andre the Giant would spend time there whenever he was wrestling in the United States. Everyone from Bobby Eaton to Rick Rude spent time there.

And it was here that James Harris would become Kamala. The character was created by The Great Mephisto, who himself was no stranger to playing stereotypes. He played a middle eastern mercenary, in spite of having been born in Ohio, and his actual name being Frank Cain. The concept was that Harris would play Kamala, a Ugandan head hunter who had previously been a bodyguard to the deposed Ugandan president Idi Amin. The CWA did a promotional video ahead of his debut which would air during their wrestling telecasts.

He would be given a huge initial push, feuding with the Heavyweight Champion of the time, Jerry Lawler. They sold out shows every time they wrestled eachother, and Kamala would win the AWA Championship against Lawler in June of 1982. Even though the character was based on very simple stereotypes, Harris loved it. In 2014, he would tell Bleacher Report of the character “I told him, ‘I’m not embarrassed to do nothing.’ I was happy. I’d always wanted something like that. It gave me an identity. When I was walking to the ring that night, the police had to hold everyone back. Everyone wanted to get a look at me or take a picture. It gave me goose bumps. Lawler acted like he was scared to death of me. I was trying to keep from laughing. He was the one that created me. That was the birth of Kamala. I guess you could say I was born twice.”

The issue with heels, the wrestling term for bad guys, was that once they were vanquished from a territory, they would have to move on. While a face, or good guy, like Lawler or Bruno Sammartino with WWWF, could stay in the same place as long as they wanted because the good guy always sold tickets as long as they had a bad guy to put them in peril, the bad guys of the time lived nomadic lives, going from territory to territory to battle the top star of the time. For an athlete as unique as Harris, he got to battle some of the biggest faces in all of wrestling.

During this time, he did a stint wrestling for Mid South Wrestling, which would lead him to a match with arguably the biggest star in wrestling at the time, Andre The Giant. The two goliaths were quite the scene in the ring, but did not get along in real life. After an incident with the ring when they were wrestling at the Superdome in New Orleans, Andre called him a dumb son of a bitch. The next night, Harris showed up with a gun and pointed it at Andre, telling him never to disrespect him again. According to Harris, after that incident, he would carry a small gun to the ring with him and not tell anyone.

Throughout the 80’s, he starred as THE heel in every major promotion in the country. In 1983, while wrestling for WCCW, the starstruck Texas based promotion, he wrestled Harley Race for the NWA World Championship, still considered the biggest championship in wrestling at the time. In 1984, he went to WWF and immediately feuded with Hulk Hogan and Andre the Giant. During this time, he was managed by “Classy” Freddie Blassie, one of the most legendary managers in wrestling history.

He would also have a big run in the AWA, one of the last remaining territory hold outs above the Mason-Dixon Line. He had legendary matches against Sgt. Slaughter and would spend the tail end of 1985 wrestling Rick Martel for the AWA World Championship.

Kamala would return to WWF in 1986 and pick back up his feud with Hulk Hogan. This was at the dawn of the Rockin’ Wrestling era, when WWF and MTV would help create an entire new generation of wrestling fan. Kamala was at his biggest stardom, as most were around this time, with his over the top character, which he had, by this point, five years to perfect. While he had a limited move set, his menacing character made up for his deficiencies in the ring. He portrayed a wrestler that could jump into the crowd at any moment, for any reason, and cause destruction. He scared crowds. He incited thousands of people with his mere existence. In short, he was great at his job.

Issues over pay would lead him to leave the company in 1987. After that, he led a sort of wrestling vagabond existence, taking on every big name around the world that had yet to sign with WWF. That meant he spent time in Japan wrestling Abdullah the Butcher, back in Texas wrestling the Von Erich brothers, Mexico to wrestle Mil Mascaras, and even back in Memphis to wrestle the man greatly responsible for Harris’ success, Jerry Lawler.

In 1992, he would make his third and final full time run with WWF. During this time, he is most famously known as being the first person to ever lose to Undertaker in a casket match that aired on television. The match happened at Survivor Series 1992, with Kamala being knocked out by an urn. And who handed Undertaker the urn? None other than Harris’ old manager from a decade and a half prior, Percy Pringle.

After that, Kamala more or less became a comedy act in WWF. There are two schools of thought about this. One could be that Harris’ complaints about pay had led Vince McMahon to push him down the card (more on this in a minute). The more likely scenario though is that tastes were changing among wrestling fans. Territory era gimmicks like a Ugandan Head Hunter were slowly falling by the wayside, with a new era of wrestlers, headlined by Bret Hart and Shawn Michaels, ready to make their mark.

After leaving the WWF in 1993, Harris went into retirement. In fact, he would go back to the job that he had before he had entered the squared circle: truck driving. Harris spent many years over multiple stints with WWF claiming to be underpaid for the work he did. He often stated that during his run with Hogan, he was not making nearly as much in the matches as Hogan was. In fact, Hogan has backed up these claims in the past, saying that he had fought for Harris to get paid more for headlining the shows with Hogan. In 1992, he claimed that he was paid 13k for Summerslam 1992, while his opponent, The Undertaker, made 500k. These numbers can be disputed, but often wrestlers who made their living as heels tended to make less than their babyface counterparts. The heel played an important role. The bad guy had to be believable to make the good guy look better when he would vanquish his enemy. But in the same vein, babyfaces were the ones that sold tickets. Heels could sell tickets in the short term but the real draw was to see the bad guy get what is coming to him at the hands of the good guy.

After WWF, he would take occasional wrestling gigs for another 15 years. He appeared in WCW, USWA, and smaller independent promotions. His final match would come in 2010, after over 30 years in the ring. That last match would be a victory as he teamed up with…Weedman in a victory over the Thomaselli brothers in Juggalo Championship Wrestling.

Wrestling is a cruel, unforgiving profession, especially during the old days. Months at a time spent on the road. TV Tapings for regional promotions, doing a show on a Friday night, driving 300 miles though the night, get a few hours sleep, then do it all over again in a new town. There is no retirement plan for wrestlers. There wasn’t a 401k. No insurance plans. No safety nets. Very few wrestlers get to their golden years in anything resembling decent physical condition. James Harris was, unfortunately, no exception.

Over the course of six months between 2011 and 2012, James lost both of his legs below the knees to complications from diabetes and high blood pressure. His failing health was complicated by the fact that he had no money to speak of. From the brightest lights of the biggest arenas, Madison Square Garden, Maple Leaf Gardens, the Superdome. Kamala headlined them all. In his later years, he was forced to live off of disability, selling wooden knick knacks he would occasionally make in his garage. He would be the first wrestler who would ever have medical ailmetns funded by fans on Kickstarter. Wrestling is tough once your music quits playing.

James Harris took a terrible stereotype and made it larger than life. He headlined on six continents. He traveled the world in a loin cloth. For three decades, he got to live out many of our dreams. He shared a 16′ by 16′ ring with every wrestler that mattered during that era. He scared people. He made our heroes look even bigger by comparison. For those of us who still remember fondly those days, that makes him a hero himself.