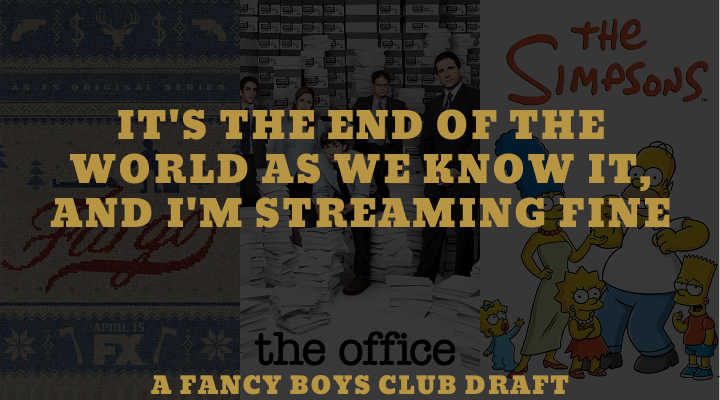 Things aren’t looking good right now. Coronavirus is all around. The economy will probably collapse. There’s no toilet paper available anywhere. And worst of all, we’re all stuck inside with our families.

Luckily, there’s a ton of great TV to help get us through this difficult time. If you’re looking for something to watch, Fancy Boys Club is here to help. Over the next few days, we’ll be breaking down our favorite coronavirus quarantine streaming options in the only way we know how: a draft.

I mean, it’s crazy this one dropped to the ninth round.

There is so much that is amazing about Vince Gilligan’s tale of meth and empire in New Mexico. You gotta start with Cranston, baby.

What he does with Walt is an absolute force. The evolution of this character from dying sad sack to kingpin wannabe is one of the most bold and daring character transformations in all of television, and it takes a very special actor to pull that off. Cranston is perfect, as is Aaron Paul. The two of them should be paired up all the time. I would watch every project they do.

This show lets you think you know where it’s headed. At first, you’re a little alarmed at how fast it’s taking you there. And then, right when you think you’ve got your bearings, it pulls the emergency brake, sending you spinning and careening and wondering where you are and what’s going on.

Also, this is one of the best finales in all of television. Gilligan never stopped drawing us in and having us guess what was going to happen next. We left with Jesse on the run and Walt bleeding out. We always knew he was going to die. But no one thought it would be like this.

TBH, this is one helluva round. As weird as round 8 was, round 9 is… well I’m not convinced there are any losers. Second that – The Circle versus the other three loses every time.

Sopranos is the iconic multi-year series with what I love best – blood and boobs. A whole crap-ton of dees, dems and dohs, some badda bing, and some earnestly stupid mob people who can’t seem to get out of their own way. Half the time it’s like a circus that forgot to bring the tents or the animals, but remembered to haul every single clown they could gather. I love this show purely on the comic relief.

You could watch the prestige hero anti-dramas of the past, or you could join me in 2020 and watch the show of today. The Circle starts out as a social experiment where a group of people compete for $100,000 while only being able interact with each other through a social media platform and living in isolation, but it turns into a beautiful story of friendship. While it may have the most contrived setup of any reality show (excluding its Netflix cousin Love is Blind, another great binge option), The Circle turns out to be the most real of all reality TV shows.

Reality TV thrives on the image people project and portray to the cameras, but because the contestants on The Circle are projecting to each other, what we see is their very real reactions, thoughts and decision making process. The Circle is great and I think there’s no better time to watch a show about people in quarantine than when quarantined yourself.

I feel like this is a bargain pick in the ninth round. The best thing about It’s Always Sunny is the fact that you really only need to watch one episode to figure out the dynamic of it, and from there you can binge watch any episode from any season. It also helps that the show is on FX,  so they are able to make ten really good episodes every season instead of trying to make 22 episodes happen. That the group stays in a state of arrested development makes it even easier to binge watch

This show fell off the rails pretty spectacularly towards the end, but that doesn’t change the fact that the first few seasons were spectacular. It hit a nerve with people like myself who dive balls first into fantasy football every fall. The banter, the drunken arguing, the celebration using the tears of your opponents. It was a show that kind of came on at the perfect time, as fantasy football was beginning to reach its nadir and remains infinitely rewatchable because so many of us still play fantasy football today.

This is more of an aspirational pick if anything. Better Call Saul is the show I hope to binge while quarantined. I saw the first season when it aired and it was great. Bob Odenkirk is the best and the fact that Vince Gilligan and co. were able to build upon the brilliant Breaking Bad is remarkable. But then I moved out, didn’t have cable and fell behind. Now is the perfect time for you all to join me in getting caught up.

Yeah, it’s a trend. I watch a ton of HBO. If that bugs you – sue me. Plus, Jack stole Better Call Saul right before I could take it. Another great round we have here. Congrats to all for ending super strong. Okay, maybe not Matt, but Jack and Brandon for sure.

That being said, True Detective, especially seasons 1 and 3, is outstanding. Gruesome as hell, this series gets right into your head. It’s so gritty you can almost taste it. The detectives are seriously flawed, but in a personal way, not in a clown-car way, and that is what makes this series so damn delicious. I’ve got to say this is still the best work Matthew McConaughey has ever done. Here he is in highlights as Rust Cohle:

40. Flight of the Concords | Matt Drufke

Ok, for real… HBO is so good. Like, I wouldn’t change this list for anything, and let’s just look at some of what’s missing: Barry, Veep, The Watchmen, Six Feet Under, Carnavale, Eastbound And Down… the slogan is right: it’s not tv. The small screen doesn’t deserve some of what this network has given us.

But to close the draft, I had to pick one of the network’s weirdest and silliest shows starring the most unlikely of stars. Jermaine Clement and Bret McKenzie took their New Zealand musical-comedy sensibilities and made one of the most amazing shows.

There is just something so special, so fucking perfect, about how these two operate. They’re lovable losers, but also incredible talented, and every show seems to have a song in a different genre that they seem to have mastered.

Kristen Schaal, Arj Barker, and Eugene Mirman also give slam-dunk performances in these episodes. And Rhys Darby, as the band’s witless manager, steals basically every scene he’s in. There are so many great jokes and laughs to be had. But also… the music is really damn good.