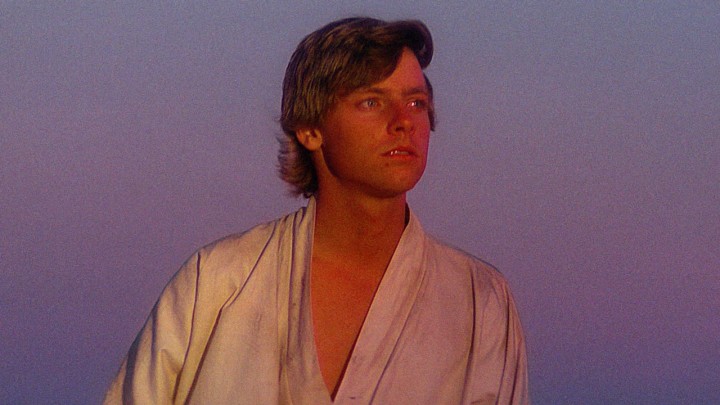 With Star Wars episode IX: The Rise of Skywalker in theaters this December, I thought it was appropriate to take a look back at the iconic saga. This is not a look back at the films themselves as much as highlighting the nine scores composed by John Williams, the most important character in the galaxy. I will be working in film release order, not narrative order, as there are aspects of the prequel scores that are obviously influenced by the original trilogy.

George Lucas could have gone with modern music that would have better fit the era of early electronica and disco. In utilizing Williams’ compositions, he gave a clear personality to the film.

While the film series itself has had its highs and lows, the one consistency is Williams’ ability to captivate and entrance us into the soul of these stories. So lets begin where it all began, a long time ago in a recording studio far, far away…

Star Wars, the movie now known as Star Wars Episode IV: A New Hope, is in fact, a perfect movie. It thrives in its quirks, be they Leia’s changing voice tone or storm troopers hitting their heads on doorways. Even the legitimate werewolf in the Mos Eisley Cantina is charming. It is a movie that constantly builds on itself until a triumphant finish, and it has a score to match.

The most recognizable piece, of course, is the opening credits. That signature John Williams crescendo that is as physically in your face as music can be. That crescendo, with the visual of a field of stars with ‘STAR WARS’ consuming ~80% of the screen, may be the most recognizable second in cinema.

There are definite ties to the works of Gustav Holst, particularly his masterwork, the appropriately titled, The Planets. Just listen to this section of “Mars”.

The most important piece in the score comes just before the journey begins in earnest. Luke has just been told by Uncle Owen that he has to stay home and help out on the moisture farm for another year. He heads out and has a long look at the two suns setting. It is a moment of pause and reflection for him. Luke has no idea that he is about to embark upon a journey that will take him from rural farm boy to the most famous legend in the galaxy.

Williams captures this with the cue titled “Binary Sunset.” It is a melancholic take on what is commonly referred to as the “Force Theme”, which is peppered throughout this film. David Cripps plays the motif solo on the french horn before being joined by the full orchestra in an uncertain, minor-key manner that will progress until the end credits. It is a moment in the film that no matter how many times I watch, I’m left with chills.

One thing of note is that despite this being the maybe most recognizable cue of the “Force Theme”, it is not the first. It is very briefly, softly played over Leia’s initial introduction in the opening scene. In retrospect we know that she is Luke’s twin and force-sensitive herself, but this was a subtlety in the score that is worth noting. Williams does this often in this franchise, and I’ll try to pin down the best examples as I move through the next eight scores.

Skipping ahead a bit, Obi-Wan has seduced tricked convinced Luke to come to Alderaan, and they stop by a local dive bar to find a ship. Enter the Mos Eisley Cantina, and the 90-degree turn in musical tone that is this timeless number:

Its an absolute jam and feels so right coming from a house band for any number of seedy but charismatic bars you’ll find in a major city. It has strong ties to the swing-king era of the 1930’s. They’re such professionals, that even when Obi-Wan begins and ends a short scuffle, they music briefly cuts out only to resume as if they’re used to playing around anarchy like this. Its brilliant.

We are given little tidbits of the Millennium Falcon’s theme cues once they board, but it’s not until they are dealing with conflict (Alderaan remnant asteroids, TIE fighters) that we get it in full. It’s a doozy, yet another instantly iconic motif that no doubt gets plenty of play in the franchise.

If there is one cue I don’t care for in this movie, it’s when Obi-Wan dies and becomes one with the Force. In that moment, there’s an uptempo swell of “Leia’s Theme” that seems oddly out of place. Short enough to not really upset the moment too much, but if there is one flaw in this score, I feel its then.

The final assault on the Death Star is just so loaded with Williams’ brilliance, I’m just going to drop the whole thing here, and we’ll talk about it after the video.

The tension of the Rebellion pilots being hunted down is magnified by the staccato brass and strings, all the while an aggressive cue of the “Force Theme” keeps intertwining as Luke prepares for his turn. That motif has now transitioned from pensive and melancholic to confident and purposeful as Luke has made his transition from lonely farm boy to star pilot tasked with saving the Rebellion.

The tone moves from intense and heavy on the horns to introspective and string-centric as Luke decides to trust the Force. Han and the Falcon swoop in and save the day, giving Luke the space he needs to strike true in the final seconds. The heroes fly away and the music holds just until the explosion, when some air on the strings signify the elegant victory in the battle. Its a nice juxtaposition to a moon-sized space station meeting its demise (and with it I’d assume tens of millions of people just working thankless government jobs, but I digress).

I cannot imagine how this must climax must have felt in theaters back in 1977, but damn if its not still a rush here in my, oh, lets say 64th viewing of this movie.

Then comes the Throne Room scene, Chewbacca’s lack of recognition, and Luke’s timeless outerwear. With it comes the final version of the “Force Theme” that has echoed through the film. This time, its triumphant and more along the lines of a victory march than a romantic, heartfelt motif.

Just feel it. Take it all in. The pomp and circumstance of it all. Then comes the coup de grace, the way Williams finishes each film, by holding the last notes for a few extra beats before snapping into the main theme. Its a perfect ending to a perfect movie. If there was never another Star Wars movie after this, it would be a satisfying conclusion. But oh, of course, the war is just beginning.

Next week, we’ll get into The Empire Strikes Back, a film that plays on many cues that are introduced here, but also introduces yet another timeless character theme, this time for a bad guy.

BONUS VIDEO:
Here’s a clip from the Star Wars Holiday Special, with barkeep BEA ARTHUR singing a lovely drunk, closing-time chantey to a slowed-down version of the Cantina Band tune.