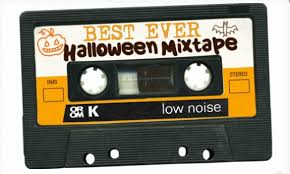 If you’re like me, you make mixes. I love putting together a series of songs for a person or for an event or even just for myself. I need just the flimsiest of reasons to open up my itunes, fire up the cd burner, and look for a group of songs.

However, it’s Halloween… A GREAT TIME TO MAKE A MIX!

Whether you need a fix for your party or to have outside for trick-or-treaters, you need some bangers for the scary pumpkin season. While I’m sure you’re going to throw on some “Thriller” or “Ghostbusters” or even “The Devil Went Down to Georgia”, here are a few tunes you may not have thought of to put on.

This is for the happy moments in your party. Mark Oliver Everett and his wonderful group of miscreants are usually happy and content to live in the world of the sad and the morose, but on this tune from their wonderful Souljacker album, eels tells the happy story of being excited to see a spooky being around the house. It feels like Casper’s anthem, and is the right way to get excited for Halloween.

I Put A Spell On You- Marilyn Manson

There are a lot of great covers I could have put on, and there are a lot of great Marilyn Manson songs I could have put on. But, let’s find the Venn diagram for my favorite Marilyn Manson cover (suck it, “Sweet Dreams”!) for this wonderful twisted gem from the soundtrack of David Lynch’s Lost Highway. Taking a few liberties from the Screamin’ Jay Hawkins version, Manson takes this song to his naturally dark place as a rhythmic percussion with a triplet bass line walk through his scream. I don’t like this song more than the original, but it’s possibly more set for the season.

Attack Of The Ghost Riders- The Raveonettes

From this Danish duo comes a tail of haunted riders. The feel of this song makes it feel like a demented song from decades past (the creepy music video helps with that). This is a song which feels scary and rocking and sexy all in the same groove.

There’s something creepy about this dance number that really does make it feel like the devil is forcing you to dance for your own torture and his amusement. Yet, through it all, this song fucking slaps. As Alex Ounsworth sings the word, “Satan” over and over, you find yourself hypnotised and creeped out all at once. Maybe there is a version of hell where all you do is dance. But, if this is the song you’re dancing to, at least it’s a fun song.

We’re ending with the real creepy song; the kind you can’t play at your party unless you want everyone to leave for a more fun soiree. Using the sound of an iron lung as percussion, J Spaceman is singing a song about giving up and turning to death, pleading for him to play a song to bring them close together. “Play a song, and I will sing along,” J sings, and it sounds like he’s pleading with death. He’s looking for anyway to hear the song that will take him to the afterlife. It’s a somber affair, but sometimes, that’s just what Halloween is about.