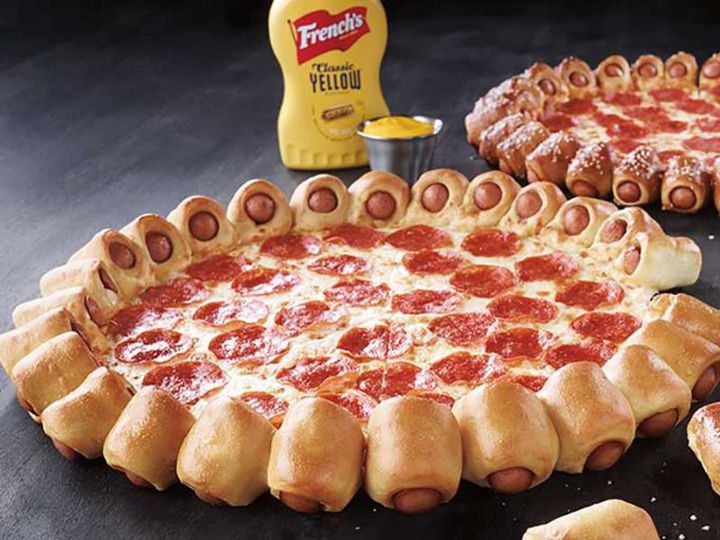 A few years ago I took my wife on a weekend getaway in Michigan wine country for her birthday. We stopped in the Dollar General located in the town of Bridgman for a few snacks between wineries. While waiting to check out, a man pointed to a product beside the register and said to his friend, “Chili flavored sunflower seeds. Now I’ve seen everything.” It has stuck with me since then. That was it. That was the top of the mountain. He had seen it all. But yet, my coastal Michigan friend, you had not. For just like the eternally prescient Bob Dylan once said, “oh the times they are a-changin’.” Change they did, as DiGiorno brought forth the croissant-crusted frozen pizza just this past year. It was a new frontier, but eventually the land Lewis and Clark explored just becomes a gas station. Innovation becomes blasé. So where do we go from here? The answer lies in our past.

In 1975, when Saturday Night Live premiered, it presented a mock advertisement for a concept that -back then- seemed outlandish and hilarious. It was a three-blade razor, mocking the recent innovation of a two-blade razor. Flash forward to the end of the century, and MadTV has its own spin on shaving humor. By this time, triple blade razors are a permanent staple of the men’s shaving zeitgeist. So, as was the style at the time, they took their joke nearly seven-times further.

What does this have to do with pizza crust? Everything, dear reader.

In 1995, Pizza Hut was urged by the federal government to sell more cheese, due to the extreme surplus the government owned in order to prop up the dairy market. Yeah, there’s one avenue to travel down, but I’ll just recommend this for further reading. Today, I’m going to stick to the goal at hand, and it starts with Donald Trump.

If you’re under the age of thirty, you might not remember how big of a star Trump was, long before hosting The Apprentice. So when Pizza Hut was set to market their moon-landing caliber invention, they turned to the only couple big enough to promote it.

You ate the pizza backwards because crust, once the bane of flat pie’s existence, was now the best part. Kids went wild for it. I can attest to this, having been eight years old in 1995. Since then, every child has asked “is it stuffed crust?” whenever pizza is ordered or heated up.

When DiGiorno brought stuffed crust to frozen pizza, the game was forever changed. That question on every child’s lips was a lead into a foregone conclusion- if you wanted your kid to eat the crust, it had to have a mozzarella stick inside of it. What a simple premise.

And then the corporate need for exponential growth brought flavored crust, flavored stuffed crust, and at long last, this illuminating discovery by Little Caesars.

They put two-thirds of the pizza into the crust. Pepperoni joined mozzarella, pushing the limits of crustial endurance. But that victory would be short lived, for a terrifying endeavor by Pizza Hut would soon come.

It was time to take a step back.

DiGiorno led this crusade and fought against their fast-food pizza rivals, pushing from its head, fully-formed, the croissant crust pizza.

Mythic in its presentation, the CROISSANT CRUST PIZZA took the quick dinner option to artery-clogging new heights. I have eaten this. I can say with confidence and security in myself that it is not good.

In hindsight, and thinking about those two men at the Dollar General, I can’t help but realize that we haven’t seen the end of this yet. Not even close.

What is next for pizza crust? Much like how SNL and MadTV mocked the future of razor blades, I’m here to mock pizza into its next uncharted land- breakfast.

But wait? Doesn’t breakfast pizza already exist? Yes, but not on a scale I’m thinking. I’m talking full-scale breakfast pizza with egg and cheese and bacon. We can even keep the tomato sauce, since that’s kind of normal for pizza anyway. The crust is the coup de grace to the concept and our coronary system.

Sure you can make one yourself. There are dozens of recipes online that can offer the “perfect hash brown crust” following a six-thousand-word essay about how their grandmother always made this and brought the recipe back from (insert other country). But that takes time. And effort. And far more energy than just tapping an app or grabbing a box from a freezer.

It’s been right there the whole time. Fry up some diced potatoes, mash them into a sheet and put everything else on top. Now we have a dynamic palette of flavor and crunch, complete with the traditional American trimmings.

This is the next mountain to climb. Not mankind on Mars. Not the bottom of the sea. A true, fast, breakfast pizza. It will change the way we live.

Put Prince Harry and Meghan Markle in the ad. Do whatever needs to be done.

And when that gets stale, just put cheese in the crust.