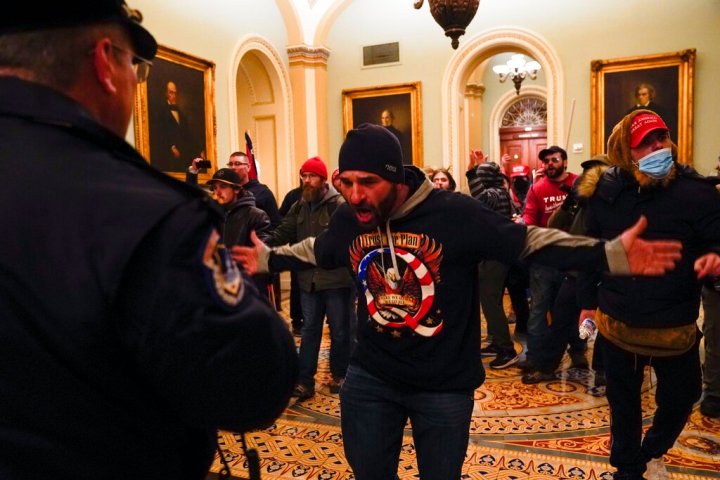 About two hours ago, I turned on the television to watch the counting of the electoral votes. I knew that some senators and congressmen were going to be making a big fracas about stuff, and I knew that people were going to be protesting somewhere in Washington. If I’m being honest, I didn’t know what to expect.

I know that I didn’t expect this.

Honestly, when this started, I was watching more for the comedy than anything else. Look, no matter what happens, Joe Biden is going to be the president in about two weeks. Trump does not have a way to “Dukes Of Hazzard out of this”. Democrats have the House. Enough GOP senators have said that they will block anything in the Senate. These electoral votes are going to be electoraled, or whatever the word you want to use is. So, my plan was to sit back and enjoy the circus. I even made a cheese plate.

It all started kinda of how I expected it. There was a big rally outside. Trump claimed he won the election. His son said some horribly trans-phobic nonsense. Rudy Giuliani acted like a delusional psychopath.

Then Congress met and everything there was as I expected it. Mike Pence was his usually boring self. Ted Cruz showed his true nature of being a boot-licking jag and was part of a team to challenge the electoral votes cast by Arizona. Steve Scalise showed that he was a fucking child because he didn’t know how to keep his mask on his face. I mean, it was all stupid.

Then protesters stormed the Capitol. Now we’re hearing things about gas masks and explosions and gunshots. From what I’ve read, Nancy Pelosi has had to be taken to a safe space as Trump supporters and Proud Boys and whoever else have stormed into her office and began to read the emails on her computer.

What the fuck is going on?

This is not going to be a news article. For a lot of reasons. I’m not a journalist. News is coming fast and furious. I don’t think any of you are coming here for your information on politics. Jesus Christ, our last article was about Taylor Swift.

So, why am I writing?

Honestly, I’m not sure.

Here’s what I do know.

For starters, let’s be entirely clear about what is happening here: spurred on by President Trump, armed domestic terrorists stormed the Capitol, causing Congress to flee and stop the counting of electoral votes. There’s a curfew in Washington DC starting in a few hours. And this is exactly what these terrorists wanted: for another day to happen in America without Joe Biden being confirmed the 46th president of the United States Of America. People are flying confederate flags… FUCKING WHAT?!?!?

It’s January 6th in our nation, and the terrorists have won. And the president and his supporters are happy about that.

Secondly, it’s important to know this: NONE OF THIS IS OK OR NORMAL. It should all be condemned and definitely not celebrated. A while ago, I couldn’t help but think that if, literally, any of these terrorists (and I’m not going to stop calling them that) were African-American, police would have fired upon them a long time ago. But we’re way past that. There’s a jackass who broke in and is standing where the vice president should be.

However you’re feeling is ok. If you’re sad or angry or confused or scared, that’s all ok. And don’t let anyone tell you it isn’t. Our country is being held hostage, and the people doing this are victims of a fraud perpetuated by the President Of The United States In America. This has never happened before. This last 10 months has been an unprecedented shitshow. And the one thing that could probably help is to find a friend and give them a hug AND WE CAN’T EVEN FUCKING DO THAT.

What’s going to happen? I don’t know. It’s almost 2:30 CST as I type this. America is burning. Right now, that’s just metaphorically. But I’m afraid that tonight, it’s going to be literal.

If anyone reading this is living in Washington DC, please be safe. Stay indoors. Respect the curfew. For everyone else, do what you need to do to get by. Maybe that means watching the news nonstop. I get that. It’s what I’m doing right now. Maybe it’s turning the news off and watching a movie or doing a puzzle and I fucking get that, too. We’re in this scary time and we all just need to survive until tomorrow. And then the next day. And then the day after that. Because that’s the only way that the good things about this country- freedom, democracy, the exchange of ideas, Paddington 2 on Blu-ray- stay alive.