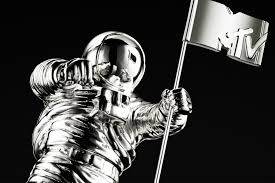 Everything that exists this year has a “Oh, this is 2020” moment, and Sunday night’s VMAs were no exception. I just didn’t expect it to happen in the first four minutes of the broadcast

MTV’s 37th annual ceremony celebrating the best music videos of the year opened with a performance from The Weeknd, who performed his hit song “Blinding Lights” on the roof 110 stories in the New York City skylight. The Weeknd is an artist I like and “Blinding Lights” (which would win Video Of The Year) is a song that I LOVE and he is crushing this performance, which is even more impressive because he is completely alone.

Because of COVID, a little thing you may have heard of, The Weeknd performed solo in the truest sense of the word. There is no audience, no band, no DJ. It is just him and he is making the song bop while helicopters fly around him. It was as if he realized that having to perform alone was an opportunity to do something grand and huge and special, and he took advantage of every moment.

About three minutes in, he hits a big chorus and screams, “New York City!!!” This makes a lot of sense because, well, it’s where he was. I imagine that when he is touring, he screams the name of whatever city he is in, because if he screamed “New York City!!!” every time, he would probably confuse people in, for example, Boston. But while the rest of that performance was meant to be performed solo, that scream was clearly meant to have a crowd. When you scream for a city, you expect the city to scream back.

Sunday’s Video Music Awards were a confusing, weird, unexceptional event for what used to be one of the biggest nights for the network whose initials, literally, mean Music Television. Clearly, the event has lost some luster, the most glaring evidence being that I don’t care that I’m writing about the event three days later. However, as I watch them while my newborn sleeps next to me, I cannot help but understand something about these awards:

The VMAs are worthless. And we’ve never needed them more.

Let’s swing at the obvious joke quickly: the VMAs are now shown on a channel that doesn’t show music videos. You know how I said the station stood for Music Television? They sure don’t show it.

If you look at the MTV schedule, it is filled with their original non-musical programming: Catfish, Teen Mom, ridiculousness, 16 & Counting. All shows about the drama. No shows about music. Even their sister station, MTV2, which was founded in 1996 to show music videos while the original station could devote itself to non-video programming, doesn’t show videos. The networks only seem to show videos on the VMAs, and even then, we only get little snippets of them in clip packaging.

MTV has to know what they’re doing. Their original programming must get more people watching than if they were showing Total Request Live or 120 Minutes or some show where we’re stunned by how old Kurt Loder is. But the network is missing an amazing opportunity.

More on that later.

Were the VMAs good this year? That’s a tricky question.

Let’s start with a weak spot: Keke Palmer. The actress/singer was tapped to host, but even she joked in her opening monologue that she was probably chosen because everyone else was afraid to go out during the pandemic. She wasn’t bad, per se, she was just… empty.

What made her hosting even weirder was that MTV made the decision to pipe in a laugh/applause track, which was fucking weird every fucking time it happened. Like, I know no one is there. I have eyes. Why are you adding in canned applause? This isn’t The Big Bang Theory.

The rest of the show seemed to be split between two different types of artists: those who knew how to perform without an audience (The Weeknd) and those who seemed content to perform as if there was one there (BTS).

Miley Cyrus, who is definitely in the category of those who knew what they were doing, debuted her new song, “Midnight Sky”. Through a swirling change of color and an assault of shimmies and sways, the “Wrecking Ball” singer showed that she could own the screen even if no one was there to cheer her on.

There were other artists who took advantage of the opportunity: Rapper Dababy turned his set into a weird sketch with masked dancers. Lady Gaga, someone who knows how to put on a spectacle, dominated the show and did so while keeping her damn mask on. Honestly, most of the performances were quite good.

Which is kind of what makes the VMAs frustrating. Because no one cares anymore.

However, I think there’s hope and a real opportunity for MTV to return to greatness. But it involves a huge risk.

It feels like we’ve been in the golden age of music videos and, honestly, it doesn’t feel like it’s going away. I think artists understand that they have to make a big splash with their music videos. Big name artists need to show that they’re still able to gets clicks and smaller artists need to do exciting things to get their name out there. I watched all of the nominated videos, and they were all visually captivating and exciting to watch.

Gosh, if only there was a network to air them.

My advice to MTV would be to return MTV2 to what it was intended to be: a non-stop music video channel. Bring back TRL. Dig up Tabitha Soren. Find the car wash Matt Pinfield is working at and get his sweaty ass back on television. People clearly want to watch these videos. Youtube statistics show that.

And the effect would be circular. If you’re using MTV2 for vidoes, then the VMAs will be a celebration of the thing you’ve been showing on one of your channels all fucking year. It wouldn’t feel like the exception, it would feel like the rule. It’s time for MTV to put the M back in TV.