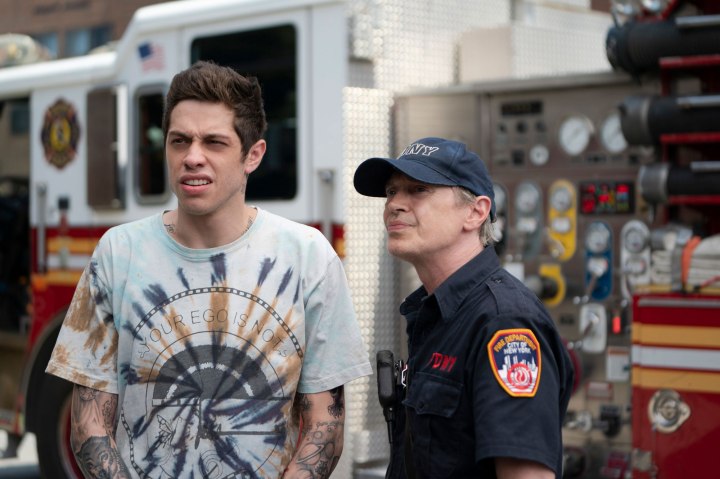 With everything going on in the world, entertainment is even more of an escape than normal. That could be why I just didn’t enjoy The King of Staten Island. It felt a little too real and cut a little too deep to be an escape. Also, Pete Davidson plays one of the more unlikable people to be a protagonist in a movie in a long time. He is kind of a benign, stoner version of Adam Sandler’s character in Uncut Gems. At the end of Uncut Gems, though, Sandler felt the repercussions of his hubris. Davidson just kind of keeps floating on.

Davidson plays Scott, which is more or less a portrayal of Pete as a person if he hadn’t joined Saturday Night Live, and just continued to live a Staten Island lifestyle. Scott has a group of friends that operate as low end drug dealers and are, much like Davidson, content to exist in their borough. It’s not unlike many of us, present company included. They make the most of their surroundings without ever trying to change them.

Only Kelsey, whom Davidson has a casual relationship with, seems to want to improve her life in their group of friends. She acts as a kind of allegory for everyone who tries to get out and succeeds, even if the success is fleeting. Her goal is to be a city planner in Manhattan so she can be successful enough to fix Staten Island someday. She is the change so many are afraid of in life, and stands in stark contrast with Scott, who doesn’t want to put in any effort to get ahead, and often plays the blame game to avoid looking inward.

Early in the movie, it is framed very obviously that Scott is a drain on everything around him, including his family. For those that aren’t aware, Pete Davidson’s father was a firefighter who died on 9/11. In the movie, his dad is a firefighter who died when he went to rescue someone in a fire, and had a roof collapse on him. While his sister has moved forward in her life, Scott seems to be clinging to a past which he will never reclaim. So he masks his feeling, usually by smoking weed. When his sister leaves for college, she correctly surmises that he is going to make life even more difficult on their mother, played by the timeless Marisa Tomei.

Through a series of storylines interwoven through the movie, Scott ends up living in a fire house, doing chores for Ray and Papa, played by Bill Burr and Steve Buscemi. Bill Burr might be the best person in the movie, able to move the story forward, and to act as the damaged, but ultimately well meaning emotional center of the movie.

The entire movie feels very real. From start to finish, we all know somebody like the character Pete Davidson is playing. Davidson is great at being someone you have trouble empathizing with. Maybe that’s the goal of the movie. It’s easy to shoe horn yourself into some of the more optimistic characters in movies. The anti heroes with redeeming factors. Davidson isn’t necessarily a redeemable character, and that’s probably where it hit too close to home.

If you are looking for a level of escapism, this might not be your movie. But if you are interested in a very real story, told painfully honestly, where you might not be able to identify with the level of apathy so many of the characters have, but you are ultimately left feeling something at the end of the movie, then it’s definitely worth the two hours of your time.