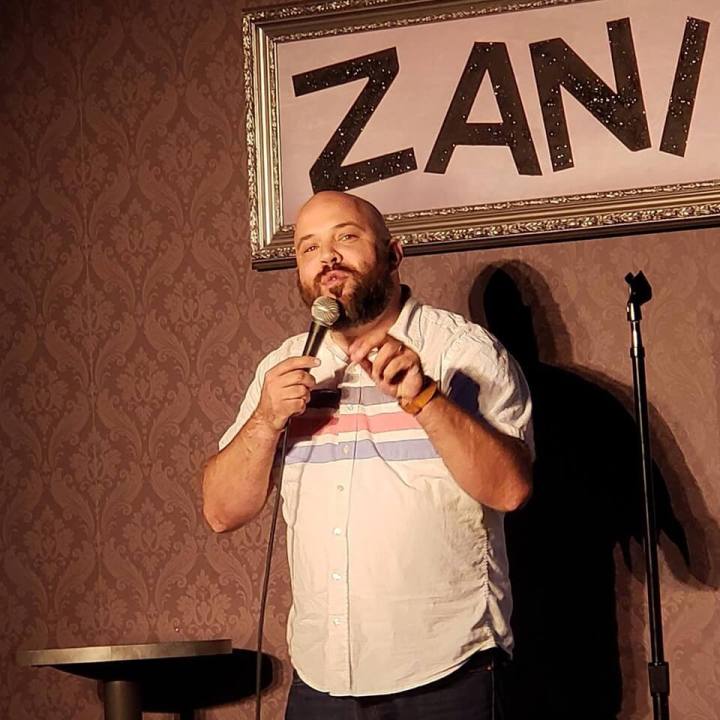 I am both a comedian and a show producer. When these elements are working well, having this dual role is wildly fulfilling. However, when things are getting rocky, the decision to begin producing shows as a comic feels like someone came up to an alcoholic and said, “It seems like you already have this thing that is taking up way too much of your life, and not always in a positive way. Still, try this heroin!”

For a long while, I was not a good producer, leaving a trail of failed showcases in my rearview mirror. My good friend (and the brilliant comedian) Marty DeRosa used to refer to the northwest suburbs of Chicago as the “Drufke Belt”. I could lead you on a walking tour of what I call the “Elgin Triangle”, the three venues where I ran shows, none of which lasted more than a few months. These venues are maybe a half block away from each other. It would be a short tour.

I tried to think about why I kept running shows for as long as I did, and this is all I could come up with: comedians I loved and respected kept saying yes when I asked them to work a room, and we always had a great time, even when there was no audience or we were in a venue that had no business running a comedy night.

And, for a long time, that was enough for me.

Fortunately, I am now part of the production team that runs Still Not Friday, an amazing weekly showcase in Aurora. I’m with of a group of smart and talented people who work really hard to put on a great product every show and I’m super-proud of what we do.

Anyways, in the eleven years of producing shows, I’ve gotten a lot of people who ask me to do my shows. This is a story of the worst.

First off, I guess I should give some advice on how to put your best foot forward to try and get booked on an independent showcase.

Send a polite message with a little bit about yourself and mention that you’re interested in the show. Give dates that you are available to perform.

If you have a clip of you doing well, send it. It’s crazy that I have to say that, but I’ve received (and watched!) so many clips of people just straight bombing their butts off. Sometimes, people send a clip with a disclaimer like, “I was trying out new stuff” or “It wasn’t a very good crowd.”

Why would I want to see that?

As a rule of thumb, here is my preference: Your clip should be the jokes you would do if I would book you and a good indication of how an audience will react to it. If there’s anything besides that on the video, don’t send it.

References are also super-helpful. If you tell me that a comic I always books would recommend you, I’m going to trust that comic’s instincts. Just make sure they know you’re using them as a reference, because producers will check. And we know when you’re lying.

Also, don’t just show up at a show and pretend you were booked. Was there a dude in Chicago comedy who did that? Yeah, all the damn time. What was scary was how often it worked. I can say first-hand that he was very convincing and had me doubting myself, so I gave him a set.

And that dude was shitty. But he is only the silver medalist compared to the story I’m about to throw down.

This would have been in 2009. We were all in the honeymoon phase of the Barack Obama presidency. The world was falling in love with James Cameron’s Avatar. And I was in the middle of producing my first comedy show at the beautiful (but empty) Clearwater Theater in West Dundee.

I found a local radio station that wouldn’t pay for a second morning DJ and we struck a deal: I would come in an hour a week and play sidekick and tell jokes, and he would let me promote the show. It never brought in any people, but I was having fun.

I got a Facebook message from a guy who wanted to do a comedy night and we set up a meeting. He asked me how many people came to the show on a weekly basis. Since I’m positive I didn’t say, “When we break single-digits, I throw a party in my head!” I can say with 100% certainty that I lied to him.

The guy ran an entertainment complex with bowling, arcade games, laser tag, and the like. We would be doing the show in a bar right off of the bowling alley. It was not an ideal venue for comedy, and I should have said that. Instead, I asked, “What’s the budget?”

He asked me what I needed to have to run a successful show. I said $250, expecting us to come to an agreement around $150. Instead, he said, “Great!”

The fact that I choked on my ice water after that should not have instilled his confidence in me.

Regardless, a date was set for a first show. I booked it with the best comedians I could, made a horrible poster, and promoted with as much gusto as possible.

It was the day of the show. I was nervous. I was prepared. I was a little nauseous.

I was not ready for Carl.

Let me answer all of the easy questions now.

No, Carl is not his real name. Yes, he still does comedy in the Chicagoland area, so I’m going to take some liberties with how I describe him. And, yes, most definitely, I will tell you his name if you put even a drop of beer on my tongue.

Carl is a dude who had been doing comedy for a while and even though I knew his name, I had never seen him perform. So, hours before the show began (I cannot stress the proximity of this story to the show), I got a Facebook message from Carl asking how much the show paid.

Now, I wish to God I still had this exchange from Facebook. It bums me out that I don’t because I would post it all right here. That being said, all you need to know is that this story is, to the closest of my recollection, 100% accurate, and whatever details I screw up do not undermine the story.

I honestly don’t remember what I told Carl about pay, but I do remember that he followed up with telling me all the clubs he performed at and then asking how he got a spot on the show. And I don’t mean future shows. I mean he wanted to be on the show for that night.

I told him the show was booked, because of course it was. Even in my worst days of running comedy rooms, I never waited until the last day to book a show. Did Carl think I just drove a pick-up into Chicago a few hours before showtime, yelled for comics, and then just took whoever came?

Carl was very insistent that he wanted to be on the show THAT NIGHT. I’m not big on confrontation, so I made a concession: I offered him a five-minute unpaid guest spot and told him if it went well, I would love to have him back on a future show.

Carl accepted. I gave him the address and time of the show and went back to nervously pooping with the fear no one would come.

The show went well, if I remember correctly. It was a mostly full room and the comics I booked all did well. Well, not all the comics.

Carl didn’t come. I was surprised.

But not as surprised as what would happen next.

The next day, I got a phone call on my landline. For those of you younger readers, a landline was a phone you couldn’t take with you everywhere. In 2009, not a lot of people called landlines. It was mostly telemarketers, my older relatives on my mom’s side of the family, and a very upset Carl.

I’m not sure how he got my number, but it wouldn’t have been that hard. My Facebook profile had it listed. It also had the town I lived in, and my phone number was in the phone book (please don’t ask me to explain what a phone book is).

Carl wanted to let me know how upset he was that I offered him a guest set, which he took as an insult to someone of his comedic experience. He works clubs! Did you hear me? CLUBS! How dare I try and offer him an unpaid spot?

Then came the kicker: Carl asked, “So when is your next show and how much time am I doing?”

I remember wanting to freak out. The man called me AT MY HOME to tell me how upset he was about the offer of stage time which he accepted less than 24 hours earlier. Now this motherfucker was asking for a paid spot.

However, I am a coward. So I told him that I would have to get back to him and never spoke with him about shows again. He messaged me a few times after, but I never responded. Thankfully, there were no more calls.

I still think about that exchange sometimes. I don’t know what gives a person that kind of hubris. I’m glad that more people aren’t like Carl. And I’m going to keep producing, regardless of who messages me hours before a show.

At the of this publication, “Carl” and I are not Facebook friends. I’m not sure who unfriended who or when, and I honestly could care less.

2 thoughts on “How To Never Get Booked For A Comedy Show: A Cautionary Tale”