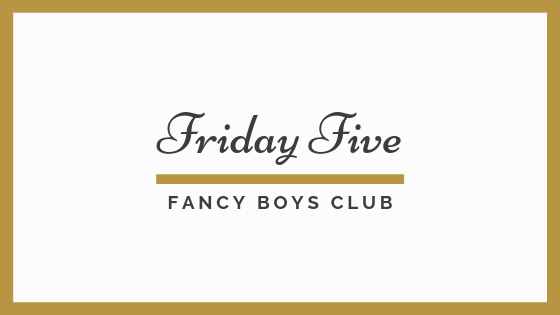 Welcome to the Friday Five, the brain child of Fancy Boys Club creator Brandon Andreasen. Each week, we will give four questions and a top five list for all the Fancy Boys contributors to tell stories and give horrible top five lists for.

With Valentine’s Day today, we thought we would ask the crew about all things love. Let’s get romantic!

1. What is your favorite romantic comedy?

Rick Copper- Field of Dreams – I cried, I got kissed, ergo romantic.

Brandon Andreasen- 10 Things I Hate About You is a rom com and Ill fight anyone that says otherwise.

Michael Grace-  I will bet I’m not the only one saying it but The Princess Bride. Come on. It’s just a perfect movie. Cary Elwes’s second most famous role after Dr. Jonas Miller in Twister.

Matt Drufke- The lack of Say Anything from all the other dopes here is, legitimately, straight-up insulting and I’m honesty contemplating how to poison everyone else on this dumb site.

2. What was your worst first date?

David Vox Mullen- She told the restaurant it was my birthday and to bring out a cake (and I had to pay for everything).

Rick Copper- I was living in LA and took a woman to the Comedy Store. The surprise headliner for the night was Sam Kinison. I had fun; she definitely did not.

Brandon Andreasen- It was at TGI Fridays and it was with another man. My buddy was a bartender and set it up as a blind date, knowing I was too polite just to get mad and walk away.

Alec Stein- The two of us spent the whole night at my favorite bar, talking, drinking, and laughing at each other’s lame jokes. We had lost track of time about four or five cocktails ago and got blindsided by the bartender yelling “Last call!” which we replied to by slamming our drinks then going outside and making out like hormon-riddled teenagers.

She pulled my head down to hers, whispering in my ear that she didn’t wasn’t ready to go home yet and asked if there was a park and liquor store nearby. So we tripped and tumbled, hand in hand, down Milwaukee Avenue until reaching Red Star Liquor. She bought a bottle of red wine, a cheap corkscrew, and a quart of beer that she gave to the homeless man outside who had asked us for change.

We found a tall oak tree in a corner of Palmer Square Park and layed down in the grass beneath it, swaddled in an orange hue of city lights. She told me about her dad dying when she was young and the religion she was hoping to find. I traced the scar on her stomach with the tips of my fingers and felt the arm beneath her slowly fall asleep.

When I finally took a sip from the bottle, I realized the wine was a tad bit too dry for my liking. 0/10 date.

Michael Grace- We agreed to meet up at a bar with live music. There was a cover (that I was told was $5 and it was $15, and I was kinda broke. So I paid for both of us, and then she …surprisingly… ran into her group of friends inside. Then she avoided me the whole night.

Matt Drufke- This is going to sound weird, but I think it all depends on your definition of “first date”. Still, story time…

I asked a woman if she wanted to go see a movie, even though I didn’t think it would be a date. She absolutely thought it was a date. The movie we saw? The ultra-violent martial arts film The Raid: Redemption. Is that a movie where a dude shoves a broken fluorescent light bulb through the neck of another dude? You fucking bet it is. My date was horrified.

A while later, I kissed that girl. Months later, because I’m a goddamned idiot, we started dating. In August of 2018, we got married.

So, I take back the answer to my first question. The best romantic comedy of all-time is The Raid: Redemption.

3. What is the most ridiculous thing you’ve done for love?

David Vox Mullen- Performed a love song at a concert and handed the girl a rose from the stage.

Rick Copper-  Took a dozen roses in a blizzard to a fine girl. They, and the relationship, were ruined by snow.

Brandon Andreasen-  I met a girl I’d been dating for about a month’s friends. We sat quietly there watching White Chicks. Just uncomfortable silence and a terrible, terrible movie.

Jack Baker-  I bought her a bunch of stuff for her new apartment and helped her move after she’d broken up with me. We did not get back together.

Michael Grace-  I’d say having my son who was born two days ago is pretty ridiculous, but beyond that probably seeing Cars 2 in theaters.

Matt Drufke- I was just out of high school and I was smitten with a girl who had never heard of They Might Be Giants. I made her 4 mix tapes containing every song they had ever recorded. And, yes, I put them in alphabetical order.

4. What is your idea of a perfect date night?

Rick Copper- Anything really, but in bed by 9.

Brandon Andreasen-  Thai Food at a local place I love, movie on the couch while sipping bourbon.

Jack Baker-  Going out to dinner and then her showing me a bunch of Tik Tok videos.

Alec Stein- A few Saturdays ago, I went to the cafe near me and got a few pours of Blanton’s, caught the bus down to Garfield Park Conservatory, then went up to Avondale to meander through my favorite record store. It was the best day I’ve had in a long time. (This is me skirting around that God awful phrase, “I’m currently dating myself.”)

Michael Grace-  One bottle of wine each, a bad movie, some junk food, and in bed by 10.

Matt Drufke- Many nights, my wife and I just get some carry-out and we watch a movie or some television while I rub her back and feet. And those nights are pretty wonderful. But those really aren’t “date nights”, per se.

So, here’s my answer: a perfect date night starts with dinner at a place that has some nice alcohol and a badass cheese plate. After that, we go to the indie movie house and see a film that we don’t know a lot about. We drive home, talking about the movie the whole time. When we get home, we have a bowl of ice cream and then head up to bed.

5. What are your top five love songs?

(EDITORS NOTE- Each of these lists, with the exception of Michael’s and my own, has- AT LEAST- one choice that makes me shake my head and mutter, “Jesus Christ”, softly under my breath. Honestly, it’s a miracle that any of these yokels ever found love.- Matt)

Alec Stein-
I had a really hard time chopping this down to even ten songs. Nonetheless, in no particular order:
“To the Dogs or Whoever”- Josh Ritter
“Feathered Indians”- Tyler Childers
“Hey Lover”- Blake Mills
“HEAVN”- Jamila Woods
“Boots of Spanish Leather”- Bob Dylan (I know this isn’t a “romantic” song, but is a love song, just a sad one, so stay TF out of my mentions)

Matt Drufke-
In no particular order:
“Birdhouse In Your Soul”- They Might Be Giants
“Punk Rock Girl”- The Dead Milkmen
“Power Of Two”- Indigo Girls
“Born For Me”- Paul Westerberg
“I Only Have Eyes For You”- The Flamingos

Want to give your own answers? Leave your thoughts in the comments.