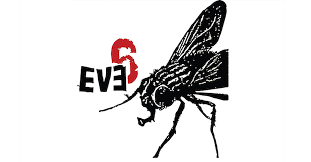 I am a believer of the populus.

If America believes that Sean Spicer is one of the best celebrity dancers in the country, so be it. If our nation comes together and is okay with Jerry Bruckheimer movies, who am I to argue. If more people voted for Donald Trump to be the leader of the free world… all right, bad example.

Because I live in this mindset, I thought I would be able to live with the results of a Twitter poll I put up a few days ago based on a debate we were having in the Fancy Boys Club facebook chat. What started as a polite chat between Brandon and his wife led to a full-fledged argument. Lines were drawn; other lines were crossed.

I feel like I need to point out that I am not a huge Eve 6 fan.

I own their first two albums (their self-titled 1998 effort and 2000’s Horrorscope and like both of them fine enough. Each album has a few gems and joys. I’m listening to Horrorscope as I type this, and am reminded exactly why this Southern Californian trio sold a ton of records for a few years. I don’t have time to listen to their last two albums, which I’m sure is something that the family members of the band have also said.

That being said, I’m sure no song on their last two albums- NOR THEIR ENTIRE FUCKING CAREER- has a song as good as “Open Road Song”.

It’s their best song. It’s the only answer

“Open Road Song” is the fifth song on Eve 6’s first album, and even though it comes after their biggest hit of their career (“Inside Out”, the track which caused so many people to betray my trust), it is the first time on the album when you see what this band is really capable of.

This is an absolutely timeless song; a song meant for getting behind the wheel, laying your foot down on the gas pedal, and driving as fast as you can. Every lyric sung by lead vocalist/bassist Max Collins is immediately relatable and just lays into you like a pile of bricks into your chest. “My palms shake as I hit 80 on the open road”, Collins belts out, and we all fucking feel him, man.

This is a song which goes in the pantheon of great bands who have talked about the love of the highway. It’s the Beach Boys singing about California highways, the Beatles telling you to drive their car, Bruce Springsteen being born to run, and Eve Fucking 6. It’s a small, select group. But they’re powerful. They’re fucking America.

I feel like I should point out that other writers in the group, namely Jake Breuning and FBC co-founder Brandon Andreasen believe Eve 6’s best song is “Anytime”, from the Out Cold soundtrack.

That’s all I have to say about the song. It’s all that song, quite frankly, deserves.

As for me, I’m finding my sunglasses and getting behind the wheel. I need to push the accelerator and turn up the radio.

This is an open road song.

One thought on “You’re So Perfect, You’re Not Here…”