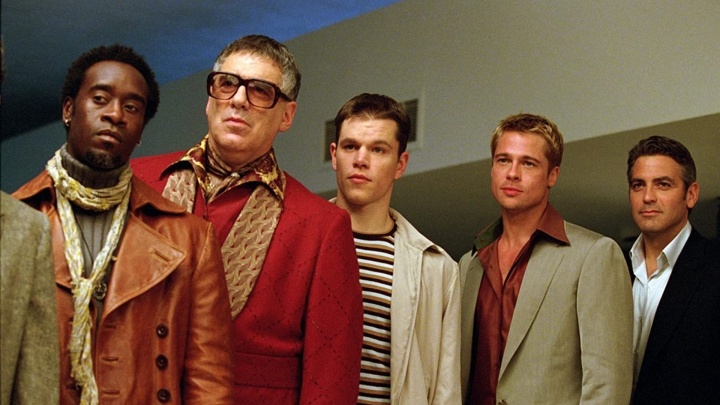 Released twenty years ago this December, Ocean’s Eleven made $450 million dollars at the box office, and it is not hard, at all, to see why. Director Steven Soderbergh (who gave us this year’s very fantastic film No Sudden Move) made this Las Vegas heist movie fun and cool, and that was exactly what we, as a nation, needed. No one does fun and cool like Soderbergh, which is impressive considering that “cool and fun” is maybe his second- or even third- best gear. Soderbergh is aware of how successful the Ocean’s trilogy is and how well they’re known in popular culture; in his 2017 heist film Logan Lucky, he has a reporter refer to the caper as “Ocean’s 7/11”.

It is fair to say that Soderbergh stacked the deck with Ocean’s Eleven, as it seems impossible not to make a cool movie when you have Don Cheadle, Brad Pitt, and George Clooney in your cast. David Mamet (in his own heist movie, appropriately titled Heist) had a character describe a master thief this way: “My motherfucker’s so cool that when he goes to bed, sheep count him.” It’s impossible to not have these words apply to any of the three actors I listed above.

Ocean’s Eleven had a massive strength in that it had a ton of cool and fun and impressive actors all working in harmony. And while some of these actors have gone on to have more successful careers, it’s hard to imagine anyone in this movie being recast. In this film, they are all perfect. And it led me to ask myself: What are the best movies that were made from each of Danny Ocean’s (Clooney) crew that isn’t an Ocean’s Eleven movie?

Before we get into it, let’s go over the ground rules.

First off, let’s talk about what I mean when I say “best movie”. I mean just that: what is the best movie the actor was a part of the cast of. So, even though Brad Pitt’s best performance was in 2019’s Once Upon A Time… In Hollywood, that’s not the best movie Brad Pitt was in. Hell, it’s not even the best Quentin Tarantino movie he was in.

Second, I’m choosing to only discuss the characters who were directly involved in the heist itself from Ocean’s Eleven. That means no Andy Garcia (best film: The Untouchables) and no Julia Roberts (best film: Closer).

Third, if an actor’s best film is one of the Ocean’s movies, that movie is disqualified and we move to the next available movie.

Lastly, I’m going to place these in order of how difficult it was for me to make this decision. Some of these were easy and some I will still be changing until I press the “PUBLISH” button on this article.

OCEAN’S ELEVEN CHARACTER: Yen
BEST NON-OCEAN’S MOVIE: This was the easiest choice to make, because Qin is DISQUALIFIED. The Chinese actor and acrobat has only been in four movies, the Ocean’s trilogy and then 2018’s Ocean’s Eight, where he reprises his role as Yen. Also, if I may have the floor for a minute, the decision to bring Qin back for Ocean’s Eight showed some absolute lack of imagination from director Gary Ross. In the film (SPOILERS AHEAD), Yen’s acrobatic prowess is used to steal a ton of jewels from the Met Gala while everyone is distracted with the one main robbery. However, the whole point of Ocean’s Eight was supposed to be one of female empowerment and showing that we often overlook women which would allow them a wonderful advantage to pull off a heist. If Ross had been smarter, he would have done stunt casting and brought in Simone Biles for the role, which would have had theater-goers losing their fucking minds.

OCEAN’S ELEVEN CHARACTER: Livingston Dell
BEST NON-OCEAN’S MOVIE: Jemison is a dude with an filmography a lot longer than I suspected. He’s been regularly working in film and television since the late 1990’s, even if you may only recognize him from the Ocean’s films. Honestly, I haven’t heard of half of the films Jemison has been in, and that’s ok. The dude just puts in the work; he shows up, does his job, gets paid, then goes to another job. He’ll probably act forever, the way Jamie Moyer has faced something like eight percent of all hitters in the history of the sport of baseball. His best film, however, is when he reunited with Steven Soderbergh in 2009 for the hilarious and wonderful The Informant! Seriously, folks, do not sleep on this movie. It’s a good one.

OCEAN’S ELEVEN CHARACTER: Turk Malloy
BEST NON-OCEAN’S MOVIE: Caan is another dude with an IMDb page a mile long, but not a lot of it is that great. I had been thinking about Varsity Blues, but FBC founder Brandon Andreasen said he would beat me up if I didn’t choose Gone In 60 Seconds, and I fucking believe him. So it was a really easy choice.

OCEAN’S ELEVEN CHARACTER: Saul Bloom
BEST NON-OCEAN’S MOVIE: While Reiner is best known for his work with Mel Brooks, he also teamed up a lot with Steve Martin in some very funny movies. A movie you probably haven’t seen is Dead Men Don’t Wear Plaid, a noir spoof which has Martin acting against old black and white detective movies. A movie you’ve almost definitely seen is The Jerk, and that’s the one that takes home the win for Reiner.

OCEAN’S ELEVEN CHARACTER: Reuben Tishkoff
BEST NON-OCEAN’S MOVIE: I think people my age (and definitely younger) forget what an extensive body of work Elliott Gould had starting in the late 1960’s. I think people also forget what a charming and insanely handsome man a young Gould also was. This is going to be the one time where I feel like I’m going to let personal preference trump, what I assume, is popular opinion. Because I think most people would say M*A*S*H*, but I’m gonna go with my personal favorite, The Long Goodbye. And anyone who says his best role is Ross & Monica’s dad on Friends needs to be slapped and sent to a good blu-ray collection.

OCEAN’S ELEVEN CHARACTER: Basher Tarr
BEST NON-OCEAN’S MOVIE: At first, they may seem like a difficult decision because Don Cheadle has been in a bunch of really excellent movies. Of course, it becomes a much easier choice once you remember that DON CHEADLE WAS IN STEVEN SODERBERGH’S UPSETTINGLY UNDERRATED 1999 MASTERPIECE OUT OF SIGHT! And Cheadle is fucking great in that movie as Snoopy Miller. Maybe my favorite moment in that movie is as Cheadle is shaking down Albert Brooks in prison and tells his that there are worse things than death; that Brooks could “fall on something hard in the shower, like a shiv… or my dick.” You need Don Cheadle to play Snoopy Miller and that movie is so fucking good.

OCEAN’S ELEVEN CHARACTER: Danny Ocean
BEST NON-OCEAN’S MOVIE: I knew that Affleck, Cheadle, Clooney, Damon and Pitt would be some of the toughest ones to choose. Because they’ve all been in a lot of great movies, and in a lot of those movies, their performances are the reason why the movie is great. I had originally thought Clooney was going the be the toughest choice, especially if you take even a fleeting glance at his resume: Good Night And Good Luck, Michael Clayton, Burn After Reading, Up In The Air, O Brother, Where Art Thou?, The Descendants, Syriana, The Fantastic Mr. Fox. How could anyone choose which among those is the best movie? However, then I remembered one thing and a great calm washed over me: GEORGE CLOONEY WAS ALSO IN STEVEN SODERBERGH’S UPSETTINGLY UNDERRATED 1999 MASTERPIECE OUT OF SIGHT! Honestly, with the exception of Ving Rhames (best movie- Pulp Fiction) that is the best movie of everyone in the cast, which is stunning if you just fucking look at how good that cast is.

OCEAN’S ELEVEN CHARACTER: Virgil Malloy
BEST NON-OCEAN’S MOVIE: This is a guy I wavered back and forth on. But, when it all comes down to it, here is the honest truth: while Manchester By The Sea is a great movie and his best performance, the best movie he has ever been in is The Assassination Of Jesse James By The Coward Robert Ford, which he is also very good in.

OCEAN’S ELEVEN CHARACTER: Linus Caldwell
BEST NON-OCEAN’S MOVIE: Ok, so this is the one that makes me upset. Because Damon is fantastic in so many great films: The Martian, Good Will Hunting, The Talented Mr. Ripley, Dogma, The Informant!, The Rainmaker and I’m sure I’m missing a dozen more that might be better than all of these. But the best film he’s in is a film where he’s (at best) the third lead, and that’s The Departed. He’s good in the film, but overshadowed by DiCaprio and Nicholson (which he kinda has to be while playing a mole). I wish I could pick a film that showcased Damon better, but we must all live by the truth.

OCEAN’S ELEVEN CHARACTER: Robert “Rusty” Ryan
BEST NON-OCEAN’S MOVIE: Anyone who knows me knows that I want to say Moneyball is the best movie he’s been in. But I just can’t. Same with Inglorious Basterds (his best Tarantino movie), Fight Club, 12 Years A Slave, the aforementioned Assassination Of Jesse James. I started writing this paragraph six times and each time the movie changed. So… fuck it. Seven. Let’s just say it’s Seven and go with that.