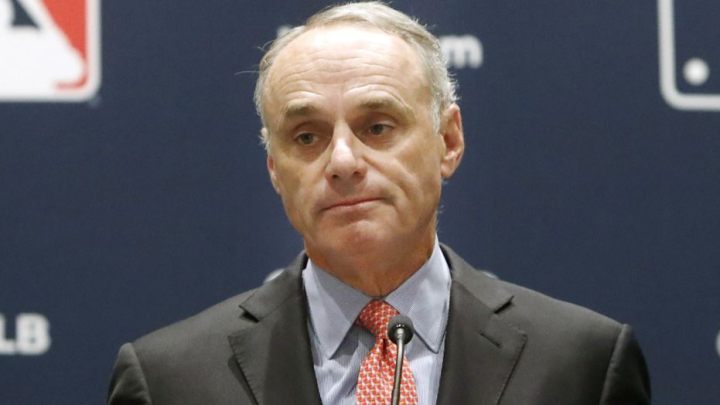 There seems to be a prerequisite in Major League Baseball, where the commisioner needs to be worse than the previous man in charge. Peter Ueberroth colluded with owners (notably White Sox owner Jerry Reinsdorf) to suppress the amount of money players could get in free agency. Bart Giammati died 154 days into his tenure (the William Henry Harrison of baseball). Fay Vincent let the owners lock out the players. Bud Selig made All Star games count (not in a good way), let noted skin flint Jeffrey Loria ruin baseball in Montreal, get paid for the honor, only to see him buy the Marlins and do it all over again. He also helped ruin baseball for years with the 1994 strike and then turned a blind eye to steroid abuse when the money started flowing again.

Then there is Rob Manfred. Manfred was not a unanimous choice among the owners to be the commissioner, with the aforementioned Reinsdorf leading a group of owners against him because Reindsdorf was afraid Manfred would be too player friendly. Little did anyone know that we would be staring at baseball in July 2020, with the least safe player conditions in league history.

Seemingly every aspect of the 2020 MLB season was destined to fail, much in the same way the NFL season is going to fall flat on it’s face. Basketball and Hockey had the common sense to come up with a bubble plan and stick with it. They put strict rules in place against players leaving the bubble (looking in your direction, Lou Williams) and in turn have had no positive tests in their leagues as they rev up toward their own playoffs.

Major League Baseball didn’t even bother to isolate their players properly. They allowed teams to travel to road games, with a “well, COVID probably won’t take out an ENTIRE team” approach. That lasted an entire weekend. The Miami Marlins have had 15 players and coaches test positive since Sunday, and the league has taken the “we didn’t see this coming, some fucking way” response by just shutting the team down temporarily, then saying retroactively that every team might not play 60 games, and they will just base it on winning percentage. Why not? Why. The. Hell. Not.

MLB seems perfectly content treating this season like an asshole fantasy football commissioner who knows they screwed up the league and midway through starts fucking with the scoring and divisions and playoff settings. Then when everyone gets mad, the commissioner screams that it’s their fault they let him be the commissioner in the first place. Rob Manfred is just running around with his arms flailing like a wacky waving inflatable tube man in a Mens Warehouse suit.

In fact, the lack of a cohesive response plan for this incredibly inevitable thing that was bound to happen is exemplified by the fact that the Marlins and Phillies played on Sunday after four Marlins tested positive, only because the Marlins players voted via text message to play the game. When TEN more players and coaches tested positive the next day, the Baltimore Orioles, who had flown down to Miami to play a three game series, got right the hell back into their private jet and flew the hell home. The Nationals, who were supposed to play the Marlins this weekend, took a player vote and said they wouldn’t play Miami.

All of this happened without the Commissioners Office and Rob Manfred, the man in charge of making sure this season happens without it turning into a slow motion train wreck, stepping and doing anything. The league finally announced Tuesday afternoon that they would “pause” the Marlins season, along with the team they were playing over the weekend, the Phillies. Herein lies the problem with not having any kind of backup plan in place: the Marlins, and lets face it, the entire godforsaken state of Florida deserve blame for this. The state has hired nothing but unlicensed alligator farm operators in paper suits to be their elected officials, and everyone is supposed to act shocked when a bunch of people who aren’t afraid of fighting those gators also don’t believe in science.

The entire country of Canada had the common sense to say “No, you idiots don’t get to come and go from our borders as please.” But Rob Manfred didn’t have the common sense to get the Rays and Marlins out of Florida, which, I must remind you, is an entire state based around the beliefs of those preachers who wave around live snakes and don’t think they will get killed by the venom because something the bible said. Why would they think an illness would kill them if they don’t think snakes will?

To make matters worse, the brain trust of baseball, the billionaire owners of the teams, dragged a stupendous amount of ass for the sake of minimizing the amount of money they would have to pay their players. In doing so, they the amount of off days that would exist during the season, meaning that there would be fewer days off to play these make up games, meaning that the teams either have to play a bunch of double headers or just not play the games. The obvious issue with double headers is that they are incredibly taxing on Major League pitching staffs, and as the season goes along, the rosters shrink down progressively to 26 from 30. I mean, that is until mid-August, when Manfred randomly decides to make the rosters 35 players deep.

They could, if necessary, extend the season and push the playoffs back OH WAIT NO THEY CAN’T. The owners and the players association decided to extend the playoffs so SIXTEEN of 30 teams makes the playoffs. More than half of the teams are going to get in, and how pissed are teams going to be if they manage to do everything right, not have to live in Florida, and play all of their games, only to have the swamp monsters in Miami make the playoffs having placed seven fewer games but having a slightly higher winning percentage?

Rob Manfred doesn’t care. Much like an Ostrich sticking it’s head into the sand, he is pretending that none of this is an issue. Meanwhile, the shotgun restart that MLB employed to make sure they were playing before the NBA or NHL has had a terrible effect on starting pitchers. Generational talents like Clayton Kershaw and Justin Verlander are injured. Star pitches Alex Wood and Corey Kluber have gone down already, as well. By the end of September, the games are just going to be played as home run hitting contests with balls spit out of pitching machines.

Combine that with the fact that there are so many playoff spots, meaning that every team is going to be in contention at the trade deadline, means that nobody is going to be able to improve their teams as the season goes on. Hell, it’s less than a week into the season and noted cheaters and former World Series winners the Houston Astros have already signed 43 year old Fernando Rodney from the Sugar Land Skeeters, which I can only assume is either some kind of rodeo, or a Nickelodeon show about friendly mosquitos.

There is going to be a playoff matchup decided when a 61 year old Ricky Henderson hits a walk off home run against zombie Satchel Paige.

All of this is to say that I really and genuinely hope that this season finds it’s completion. There is so little right now in the world that you can watch to escape everything else around you. We need a little bit of escapism. We need to be irrationally mad about something to take our minds off the fact that there are so many legitimate things to be angry about right now. I can assure you that NASCAR had lost everyone’s interest the moment they had to go back to racing on the shit ass tracks that aren’t named Bristol or Talladega. Golf is fine to watch when literally watching your own grass grow loses it’s charm. We need baseball.

What we also need at this point is to know that the players we gripe and praise are in the safest conditions possible. No human, let alone a finely tuned athlete, should ever be subjected to Florida. Also, don’t think I won’t let loose on Arizona and Texas when this inevitably happens to their teams. Watching teams fall apart isn’t quite as much fun. It’s entertainment, but eventually that feeling that you aren’t getting to watch the best athletes at the top of their games. That’s why watching Mike Tyson box today would be so depressing. We remember the Mike Tyson who could knock someone’s jaw off with a punch. Not the old guy who is a punchline for one of Tom Segura’s better jokes.

If they figure it out, then baseball will still be there at the end of October, crowning a champion that 29 franchises will deem illegitimate while one team revels. If they don’t figure it out, then baseball has an incredibly bleak future. Next year could have the same Covid related issues that will plague this season. After that, a strike is most likely on the horizon for 2021. That’s why we, as fans, need this season so badly. In the face of everything going wrong, there is still that universal feeling of cracking a beer and kicking back and relaxing while baseball, the ultimate background noise, plays on.

Unfortunately, the league is run by a guy hated by both the owners and players. A man in so far over his head that they have called off the search and rescue mission and are now sending a body recovery crew to find Manfred’s career. He will be seen as a less charismatic Roger Goodell, a man with Jerry Jones’ hand so far up his ass, his Super Bowl rings give him indigestion. Gary Bettman long acted as the king of despised commissioners, booed with such glee by fans of every hockey team the moment he stepped on the ice, is now shepherding a league that moved 100 percent of it’s operations to Canada to make sure they got their playoffs in safely and will probably earn a lifetime contract extension because of it. Adam Silver, the most aerodynamic man in America, is helping to preserve the NBA as the most popular sport around the world.

Baseball is stuck with Rob Manfred, a man who hates the own sport he lords over. He has run the league with all of the effectiveness of a bingo caller in a three alarm fire. He has ice in his veins. And by that, I mean he looks like he might be physically dead the moment he gets asked a tough question. a better man might be able to lead this league during these tough times. Manfred is not a better man. He isn’t even as good as the song “Better Man” by Pearl Jam (song sucks, don’t @ me). If the league falls apart, it will fall on him, and he will stare at it as if a dog had just taken a shit on his shoes for the 143rd day in a row, with a quiet disappointment and admittance of failure.

But hey, if the season get’s shut down, at least the players can go to Magic City in Atlanta. They have the best wings around, after all. Just ask Lou Williams!