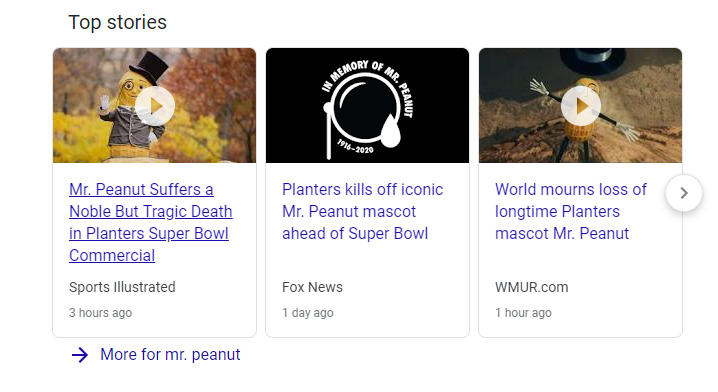 Did you hear that Mr. Peanut died yesterday? Did you see it in their official tweet (starring Wesley Snipes!) or in one of the many other branded tweets about it?

Ever since the Superdome lost power during Super Bowl XLVII and Oreo tweeted some dumb joke about dunking cookies in the dark that got a shit load of retweets, every brand has been falling over themselves to prove how fucking funny they are.

Wendy’s got sassy. Old Spice got weird. Steak-Umm got nihilist and depressed. And now with the late Mr. Peanut, we’ve reached the logical end.

Where brands used to respond to big cultural conversations with their own pseudo comedic take, they’ve now decided that it’d be easier to just create their own. And every time we retweet, quote retweet, like, comment and share, we’re helping them get their dumb message across.

Despite what many people think, these jokes aren’t being written by interns. They’re crafted by a highly paid team of managers and approved by even more highly paid executives, or outsourced to advertising agencies who charge hundreds of dollars an hour for writing tweets that capture their “brand voice.”

This is such a big deal in marketing now that you can find thousands of blogs that will teach your team all about the value of being funny in tweets. Side note – the only thing worse than brands trying to be funny on social media is marketing bloggers jerking each other off with content about how funny and creative brands are on social media.

“While you may be thinking a funny post being shared doesn’t have any value, it is actually showing off the fact that your brand isn’t a emotionless robot, but instead, a lovable personality.”

Is this a how to be funny social media blog or the start of my suicide note?

When brand accounts share personality and humor on social media, it’s delightful [Narrator voice: it isn’t] — and it captivates the collective internet. It’s funny when brand accounts use social media like the real people behind the copy, and it breaks up the monotony of the negativity and mistrust that characterizes a lot of people’s feelings about their social feeds.

12 of the Sassiest Brands on Social Media

Ahh yes, please break up the negativity and mistrust we feel about the CEO of your corporation getting rich off the hard work of your employees by dunking on the competition.

Advertising creatives and copywriters are the worst. They’re insufferable failed improv students who didn’t have any original comedic thoughts so they whore themselves out to advertising agencies and corporations to “humanize” brands and try to trick all of us into forgetting that those same brands are destroying the planet so their shareholders profit.

A lot of people online joke that conservative comedy is dead or only has one joke, but it’s thriving in 2020. It’s just that their venues aren’t comedy clubs or the alt shows throughout America, their venues are the social media channels of huge brands.

And every time you retweet them you’re helping them make society worse.

One thought on “Stop Following Brands on Social Media”