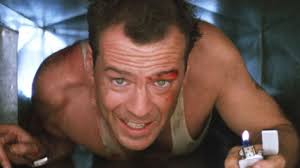 We all need surprising moments in our life. Little things that happen that take us by surprise and make us look at ourselves, and the world, from a different angle. Sometimes those are big events, and sometimes they’re little things. But they’re always powerful and need to be respected and observed.

For me, one of those moments was when I realized that “Die Hard” was based on a book.

I used to think it was a Christmas movie, but then I realized that the movie had a theatrical release in July. Name me another Christmas movie with a July release date. Seriously, yell it at your screen and if you yell loud enough, I’ll hear you.

Since it’s release, “Die Hard” has become more of an industry than a film. It’s spawned four sequels. Nine video games. A full action career for Bruce Willis, who had only had really only been known for his role in television’s Moonlighting until then (and wasn’t the first, second, or even tenth choice to play hero John McClane).

And it was all based on a book.

Before I continue with any of this, I feel like I need to apologize to Otis Redding.

This piece was originally going to be things in pop culture that you, the reader, might find surprising. Obviously, the origin of “Die Hard” was going to be my number one fact.

But, when jotting down mental notes, I started thinking about all of the songs that I had long thought were written by the most famous singer but were smaller releases for other artists. For example, it took me years to realize that “Downtown Train” was written by Tom Waits because I was so enamored by the Rod Stewart version.

But the king of all of these is Otis Redding.

I still remember the shock I felt when I realized that it was Otis Redding, and not Aretha Franklin, who had recorded the original version of “Respect”. And, I was in my late 30’s when I realized that it was Redding, and not The Black Crowes, who had made “Hard To Handle” first. Even though he’s recognized as one of the greatest artists of all time, Otis Redding is still, somehow, wildly underrated. He’s like the Kareem Abdul-Jabbar of pop music: sure, everyone knows he’s great, but then you look and see that no one has scored more points in the history of the sport.

And even here, he’s second place in this article. My apologies to Mr. Redding.

So, what do we know about Nothing Lasts Forever, the 1979 novel from which “Die Hard” is based off of?

If I were a better writer, I would have gotten this book from my local library and read it. That’s the kind of research and detail that you all probably deserve. But, a cursory summary of the book shows that there’s not a lot there there.

Roderick Thorp’s book has very little in common with Die Hard. There’s a character named Stephanie Gennaro. There’s a bad guy who’s last name is Gruber. It takes place in a skyscraper. And that’s about it.

Honestly, the loose connections here are laughable. There’s about as much of a connection between this book and this film as there is between the King James Bible and… well, “Die Hard 2.” Though, I will admit that no one like Reginald VelJohnson appears in either the Old or New Testament.

And, because of this, I’m not entirely sure why the book was needed to make this movie? I mean, sure, there are some small plot points and character names, but nothing really to keep things trucking along. Also, I’m not sure how “Die Hard” could be a book, unless every page read something like this:

“And then John McClane beat a guy up, and it was fucking awesome. Also, fuck… Hans Gruber is cool. I get that he’s supposed to be the bad guy, but I bet we would be really great friends.”

In the end, I’ve decided to take this fact and hide it in my back pocket.

As far as I’m concerned, “Die Hard” is still the creation of screenwriters Steven E. de Souza and Jeb Stuart. I’ll give Thorp the assist, but I’m going to keep my faith in John McClane, a man whose name isn’t even mentioned in Nothing Lasts Forever. I’m keeping my faith the way children have their faith in Santa Claus.

So, maybe this is a Christmas movie.