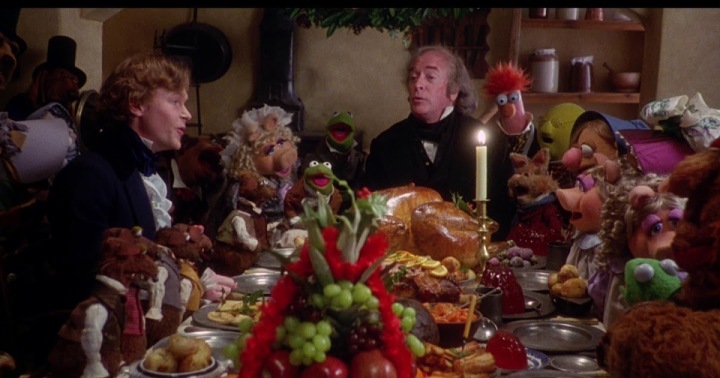 Today is Christmas Eve, just one more sleep ’til Christmas as Kermit sings in The Muppets Christmas Carol. There are many, perhaps too many, film versions of Charles Dickens’ classic holiday novella. In my opinion, the only opinion that matters in this column, the Brian Henson-directed, Sir Michael Caine-starring, Muppet-filled musical version from 1992 is the only one that stands the test of time. It combines childhood nostalgia with legitimate humor and tender tugs at heartstrings with legitimate terror. It’s a tradition in my family to watch it while putting up the Christmas tree, so I have decades of experience in annually singing along. I insist on you watching the movie before reading, but if you want to do the reverse, how could I possibly stop you? So here is the definitive, objective ranking of the songs in The Muppets Christmas Carol.

Now there is one caveat to this ranking. One song was actually removed in recent editions, allegedly because it was too “sad” for a children’s movie. Not that the specter of death isn’t lurking around every corner of the movie anyway. There are a few scenes that actually feature genuine joy, but that’s not where we start.

9. Chairman of the Board

That’s right. The worst song is not “When Love is Gone.” In fact, the song was so dumb that the scene was never filmed. The song only appears on the official soundtrack, and is so remarkably skippable. It makes sense only in the sense that it shows the headmaster’s influence on the mind of young Ebenezer and how his whole Scrooge-ness came to be. I mean I’m really stretching to find some reason for this to have been made, especially considering that the Ghost of Christmas Past gets two songs in its segment.

8. When Love is Gone

Here it is, the controversial ballad once-removed and now replaced in the film. It has an atmosphere of Disney-whimsy melody to it, but just stops the movie dead for a bit. On the version I grew up with, one taped by my grandma off of stolen Pay-Per-View (true hero stuff), the tracking was destroyed during the song from it being fast forwarded every time. My sister and I had no desire to sit through it. But in its defense, it is a legitimate song unlike “Chairman of the Board” and it does serve a purpose in making Scrooge super sad. Ghost of Christmas past kind of got the short stick when it came to songs, but then again, this is typically the least interesting part of any Christmas Carol iteration.

Tiny Tim’s ode to merely existing is next. It’s a heartfelt tune that establishes the family bond between the Cratchits. Tiny Tim, riddled with whatever 19th century cornucopia of disease that goes unnamed in this version, is still filled with gratitude for each day. This is also the closest we get to any religious sentiment in the movie, without explicitly naming Christ, God the father, or any other Christian symbolism. There is a chasm of quality between the last song and this one, but it still doesn’t resonate as well as our next ditty.

6. Room In Your Heart

Full disclosure- I grew up TERRIFIED of Beaker. I mean look at him. Bone-chilling Muppet design. Nonetheless, Bunsen Honeydew and Beaker have a little duet about the concept of charity and how giving of your spare change can actually mean the world to someone who has nothing at all. “If you want to live, give freely, and you will find, that what you get in trade my friend is peace of mind” is the central theme of the story. Spoiler alert but Ebenezer learns that giving and kindness are good and being stingy is not. We’re still at the beginning of the movie here, so Scrooge isn’t having it and tells them to go to hell without explicitly telling them to go to hell.

Oh, but there’s the redemption. Scrooge is a changed man and sings accordingly. We get Sir Michael Caine’s delightful English voice singing along with a chorus of Muppets. His overall performance in this movie is brilliant, and is critical to why this whole thing works. He can portray the darkness and brutality of Scrooge but then light up the screen upon his change of heart. That spiritual journey is progressive, and our next stop is where the seeds of seasonal mirth take root in Scrooge’s barren heart.

We’re into the full-on bangers part of the ranking now. This song is great and has a real classic Muppets rhythm to it. Anytime we get several Muppets involved, especially random creatures singing along, it’s a good time. Scrooge and the Ghost of Christmas Present are wandering around daytime London on Christmas. Everyone in town is filled with joy and it starts to rub off on the old miser. “A part of childhood we’ll always remember, it is the summer of the soul in December, yes when you do your best for love, it feels like Christmas” Man that’s great. Just nails the feeling of Christmas morning and the special atmosphere we attach to it each year.

In Dickens’ original text, there was only one Marley, Jacob. Using Waldorf and Statler for this movie is absolutely perfect, however, so it’s easily forgiven and forgotten as the two spectral humanoid Muppets visit Scrooge. Oh! And the chained lock boxes sing too! The song has a fantastic bridge as well- “DOOOMED SCROOGE, YOU’RE DOOMED FOR ALL TIME! Your future is a horror story, written by your crimes!” Somehow, even after this extremely convincing and catchy number, Scrooge is all “humbug” about it. Growing up, this was my favorite of the songs, and I would listen to it all year on the CD copy of the soundtrack we had… But it’s not the best.

2. One More Sleep ’til Christmas

Gonna get some heat for this pick at number two, as it’s a stone cold classic. Kermit and Tiny Tim wander about on Christmas Eve and experience the magic and majesty of the Christmas spirit. Its a saccharine beauty, bereft of all cynicism. It’s central theme spawned countless Etsy projects. Yes, there is just one more sleep until that wonderful. There’s the penguin skating party. “There’s something in the wind today that’s good for everyone, yes faith is in our hearts today, we’re shining like the sun.” It’s the childhood excitement that is unmatched on the calendar. It isn’t just about gifts, its about the pure, unbridled joy that comes with the annual glory in anticipation of Christmas morning. Find me singing this from Thanksgiving until around Presidents’ Day, but it’s not our number one.

Undisputed. Okay, maybe disputed. But it’s undeniably brilliant and a perfect tone setter for the movie as a whole. A cavalcade of melodic Muppets follow Sir Michael Caine around London singing his flaws. It opens with “When a cold wind blows, it chills you, chills you to the bone, but there’s nothing in nature that freezes your heart like years of being alone.” It encapsulates the Scrooge character better than any Christmas Carol before or after. The song is filled with the voices of several characters, none of which are major players in the Muppet world. The lyrics bounce around from direct criticism of Scrooge himself to a commentary of the separation between the haves and the have-nots. There’s the line “us poor folk live in misery, it’s even worse for mouses” which gets a call-back moments later “don’t ask him for a favor ’cause his nastiness increases, no crust of bread for those in need, no cheeses for us meeces.” Ah, what a lovely song this is. There’s a ladies choir that asks if maybe Scrooge is a “victim of fear and of pride” which is emphatically denied. It ends with the mob singing “everyday, in every way, Scrooge is getting worse!” Absolutely, perfectly setting up the cold heart of the protagonist. I’ll put it up there with any song in the Disney canon.