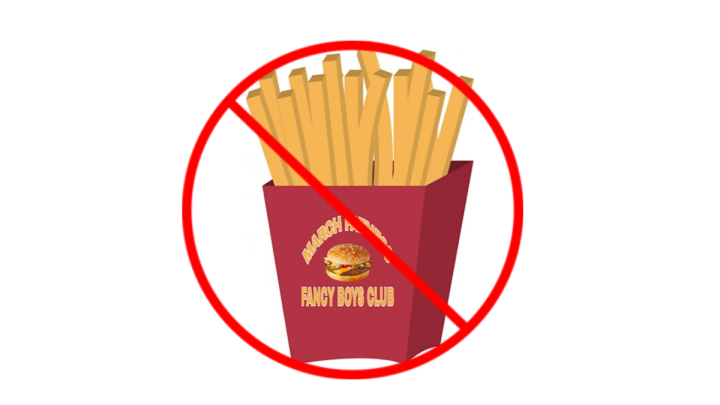 Fancy Boys Club founder Matt Drufke claims that we’re trying to find the best fast food item, but as editor, cofounder, and ombudsmen of FancyBoysClub.com, I am sad to say that the bracket we have created falls woefully short of that goal.

At no point in the nomination process was the term “best” ever defined, let alone any clear criteria provided to the nominating committee as to what constitutes “fast food.”

This is how we ended up with multiple items from Panera Bread—a fast casual restaurant, a distinct classification of eatery that is a step between fast food and casual dining—and we left off one of the most beloved, iconic fast food items of all time…The McRib.

In the interest of full disclosure, I’ve never eaten a McRib and I don’t ever plan to. This goes far beyond a matter of taste or personal preference, this is an issue of integrity. Also, Matt Drufke says I had a chance to vote for the McRib in the internal nomination process, but the process was confusing and I wasn’t on Facebook much that day because I went home sick. But none of that matters.

(EDITOR’S NOTE: While Jack has the right to his opinion, there are some facts we would to clear up. Jack made a claim that he wasn’t on Facebook much that day we nominated items for the list and that the process was confusion. First off, the nominating process lasted for three days. Secondly, Jack never asked for clarification in the process, and, furthermore, used this exact same format for another bracket which occurred a year ago.

If the process was complicated, it didn’t stop Jack from adding his approval to Arby’s Curly Fries or Panda Express’ Beijing Beef or four other items. Had Jack also given a nomination for the McRib, it would have been bumped into a 10-13 seed as opposed to being left off.

Jack may disagree with the results, but the fact remains: only one contributor believed the McRib was bracket-worthy, and he was not that contributor.)

It is an insult to the intelligence of our readers to say we are trying to find the best fast food item when we have clearly ignored one as beloved as the McRib.

The McRib has an intense, cult following. Each year, fans across the world celebrate its arrival and mourn its disappearance. People travel hundreds of miles for their chance to purchase the famous barbecue pork sandwich.

Name one other item on this list that inspires that level of dedication. Do White Castle Bacon & Cheese Fries do that? I don’t think so.

How many items on this list have their own active, dedicated subreddit? None. But the McRib does.

How many items on this list were the inspiration for an episode of The Simpsons? None. But the McRib was.

How many items on the list have a website dedicated just to helping people find them? None. But the McRib has one.

Just kidding, the McRib has two.

Also, 7/11 is a convenience store, not a fast food restaurant. Apparently words just have no meaning anymore, which is an odd editorial position for a blog to take.

If you stopped random people on the street right now and made them list fast food items, you would hear the McRib mentioned long before you’d hear Cici’s Mac & Cheese Pizza, Burger King’s Loaded Croissant, or Wendy’s Southwest Avocado Chicken Salad. But you wouldn’t know that by looking at the March Fatness Bracket.

We set out to find the best fast food item. It was our job to scour the Burger Kings, McDonald’s’, and White Castles of the world to put together a comprehensive list of the most popular, beloved, and iconic fast food items, so that our readers could in turn vote and determine which is best.

We failed at that.

How can we say we’re finding the best fast food item when we’ve left off a sandwich that would be voted #1 by many?

It was not our job to list our 64 favorite food items, restaurant category be damned. But that’s what we’ve done.

The results of this bracket will not tell us the best fast food item, they will tell us the most popular food item that is prepared quickly and liked by at least two Fancy Boys Club Writers (and people who don’t contribute but are still in the group chat).

I’m not sure what those results will mean, but I am sure that I’ll be sitting this one out.